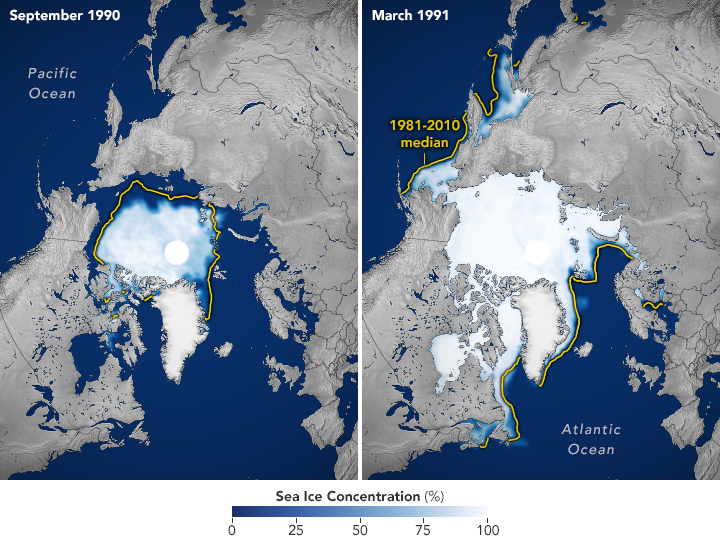 Layers of frozen seawater cap the Arctic Ocean. This sea ice grows dramatically each winter, usually reaching its maximum in March. It melts just as dramatically each summer, reaching its minimum in September. It is a natural fluctuation that has been going on for thousands of years, but winter and summer trends have become negative in recent decades.

These image pairs show the average concentration of Arctic sea ice for the month of September (left) and the following March (right) from September 1990 to March 2021. Opaque white areas indicate the greatest concentration, and dark blue areas are open water. All icy areas pictured here have an ice concentration of at least 15 percent (the minimum at which space-based measurements give a reliable measure), and cover a total area that scientists refer to as the “ice extent.”

The yellow outline on each image shows the median sea ice extent for September and March as observed by satellites from 1981 to 2010. The median is the middle value; that is, half of the extents were larger than the line, and half were smaller.

Since 1978, satellites have monitored sea ice growth and retreat, and they have detected an overall decline in Arctic sea ice. The rate of decline has steepened in the 21st century. In September 2002, the summer minimum ice extent was the lowest it had been since 1979. Although the September 2002 low was only slightly below previous lows, it was the beginning of a series of record or near-record lows in the Arctic.

The new summer lows, combined with poor wintertime recoveries, have fueled a persistent decline in Arctic sea ice. Since 2002, ice extent at the summer minimum has not returned to anything approaching the long-term average. Though winter ice extent has fluctuated, satellite and in situ observations have shown that there is much less multiyear ice and more annual ice.

The white circle at the center of each image is the “pole hole,” north of which satellite sensors have historically been unable to collect data. The sea ice estimates from the National Snow and Ice Data Center, NASA’s archive for sea ice data, assume that this hole is ice-filled.