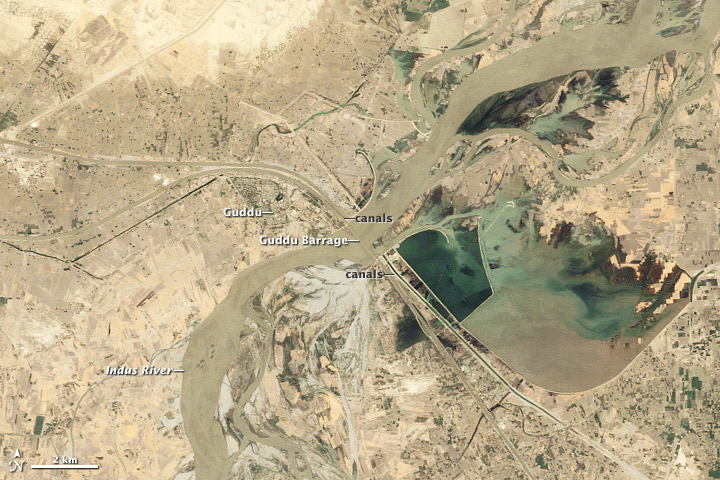 Flowing southward through Pakistan and emptying into the Arabian Sea, the Indus River has supported agriculture for millennia. Fed by glaciers in the Himalaya and Karakoram mountain ranges—and by Asian monsoon rains—the river experiences substantial fluctuations every year.

Flow is typically highest from mid-July to mid-August, as snow melt and rains spike around the same time. Water flow is lowest from December to February. Because the Indus irrigates an estimated 18 million hectares (44 million acres) of farmland, the landscape changes along with the river.

The Thematic Mapper on the Landsat 5 satellite observed these seasonal changes in the Indus River and surrounding lands in Pakistan from June 6, 2009, to June 9, 2010. These natural-color images focus on the area around the Guddu (or Gudu) Barrage, just south of the border between Punjab and Sindh Provinces.

With a total length of about 4,450 feet (1,356 meters), this barrage—a type of dam—is Sindh’s largest water project. Like other barrages along the Indus, it is designed to control the flow of water on the river and reduce the risk of flooding. At the same time, the barrage supports irrigation by storing water throughout the year. Some of the water is retained in the holding structure east of the river.

Working around the river’s ups and downs, and using an extensive irrigation infrastructure, Pakistani farmers coax both summer and winter crops out of the land. According to Dath Mita of the U.S. Foreign Agricultural Service, Pakistan has two principal growing seasons, with cotton and rice grown from May to November (Kharif season) and wheat from November to May (Rabi season). Other crops also thrive in the area around the Guddu Barrage, including corn, rice, wheat, cotton, millet, and sugar cane.

Snow melt in Pakistan’s northern mountains begins to add to Indus River volume each June. As sunlight warms Central Asian land surfaces and melts the snow, it also forces warm air up into the atmosphere, drawing in cooler, moister air from the Indian Ocean. The Himalayas block the transport of air masses, pushing them upwards, boosting the convection process, and amplifying the monsoon rains.

Although river levels rise in June, the Indus generally remains confined to its channels. Rainfall intensifies in July, and Pakistan actually receives about 70 percent of its annual rainfall between July and September. In July and August, some water may overflow into holding structures and depressions along the Indus, while large quantities are distributed to farmers who flood their fields, particularly for rice.

By April 2010 the region looks dry, and by June 2010 it appears parched. In fact, water levels on the Indus and in the holding structure east of the barrage are lower in June 2010—shortly before the historic 2010 monsoon floods—than in June 2009.

Strong monsoons have likely occurred in southwest Asia for millions of years. Likewise, runoff down the Indus River has supported irrigation agriculture in Pakistan for 4,000 years. Even now, the majority of Pakistan’s population lives in rural areas, with direct links to farming. Although the Indus River can cause catastrophic damage when flooded, the river and the irrigation infrastructure surrounding it sustain a population of millions where water is generally scarce.

World of Change: Seasons of the Indus River