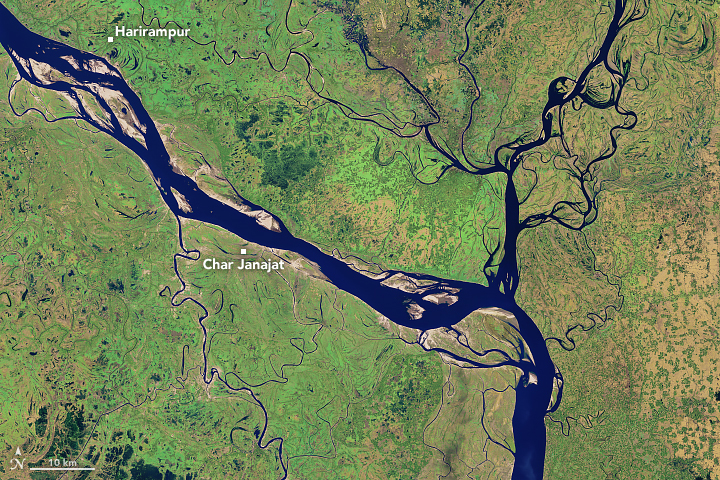 In Sanskrit, Padma is a name for the sacred lotus flower, a symbol of beauty, purity, and growth. The meaning is well-suited for the river bearing the same name, which seems to be constantly evolving and changing in beautiful ways. That is a mixed blessing for the people who live nearby.

The Padma is one of the major rivers of Bangladesh, and satellite imagery shows that it has been growing in size, transforming in shape, and changing in location for at least the past 30 years. It forms in India at the junction of the Ganges and Jamuna Rivers, then merges with the Meghna River and ultimately empties into the Bay of Bengal.

Thousands of people rely on the Padma for transportation and for farm irrigation, which means they must regularly adapt to changes in the river’s 130-kilometer (75-mile) shoreline. Numerous farms, houses, and lives have been lost or displaced in recent decades because of riverbank erosion that can swallow large chunks of the shore. Every year, hundreds (sometimes thousands) of hectares of land erode and fall into the Padma River. Since 1967, more than 66,000 hectares (256 square miles) have been lost—roughly the area of Chicago.

The extreme erosion patterns have two main causes. First, the Padma is a natural, free-flowing river with little bank protection, other than some occasional sandbags to protect buildings. Second, the bank sits on a large sand bed that can be eroded quickly.

Like parents measuring a child’s height, scientists measure erosion on the Padma River by noting differences in its width, depth, shape, and overall appearance. These natural-color satellite images show the changes to the shape and width of the Padma since 1988, and each twist and zigzag tells a different geologic story about the river. The images were acquired by Landsat satellites: the Thematic Mapper on Landsat 5, the Enhanced Thematic Mapper Plus on Landsat 7, and the Operational Land Imager on Landsat 8. They include a combination of shortwave infrared, near infrared, and visible light to highlight differences between land and water. All images were acquired in January and February, during the dry season.

Over the years, researchers have observed an increase in the river’s sinuosity and braiding. Sinuosity is the tendency of the river to snake back and forth in an S-shape across its plain. Rivers with high sinuosity are labeled “meandering.” Such rivers evolve as the flow wears away the outer edges, widening the channel. The flow on the inner edge has less energy, allowing more sediment to be deposited there. Sometimes meandering rivers leave scars where the water once flowed, as you can see in the 2014 image of the Harirampur region.

Meandering rivers can turn into braided rivers, which have numerous channels that split and combine again. Whether a river is braided or meandering has a lot to do with the amount of sediment it carries. If there is a lot of sediment, they tend to pile up in places and divert the water flow, creating a braided river.

The sediments can come from a variety of sources. One theory suggests that some of the sediments are remnants from a landslide triggered by an earthquake in 1950. Researchers think the coarser material (like sand) took half a century to pass through the river.

Over the past three decades, the river has changed from a relatively narrow, straight line to meandering to braided and, most recently, back to straight. In the image sequence, the most noticeable change occurs upstream near the Harirampur upazila region, which experienced the most erosion. A large flood rose over these banks in 1998, exacerbated by the opening of the Farakka barrage (dam) in India, which released more water into Bangladesh.

Further downstream, meandering bends eroded the land near Char Janajat. The river’s curves became most extreme from 1995-1996. The curve started to develop in 1992, began to decline in 2002, and has since disappeared.

Researchers are particularly interested in the Char Janajat area, the site of a new bridge crossing. As one of Bangladesh’s biggest construction projects, the Padma River Bridge will connect the eastern and western parts of the country and shorten travel times between some locations from thirteen hours to three. There are some concerns that erosion could threaten the construction of the bridge, although some researchers believe it could actually stabilize the land and reduce erosion once it is finished. The bridge is scheduled to open by the end of 2018.

In recent years, Padma’s erosion rates, sinuosity, and braiding have decreased. Erosion slowed as the meandering bends disappeared due to sedimentation and chute cutoff—when the water flows across the land instead of following the curve of the river. But that does not mean the area is free from erosion. Any disturbance in the ecosystem, such as floods, landslides, or construction, could influence the morphology of the river.