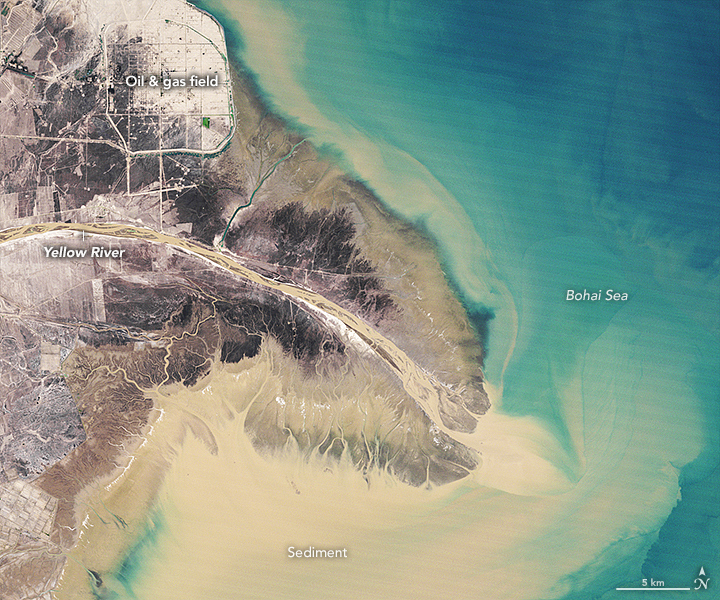 China’s Huang He (Yellow River) is the most sediment-filled river on Earth. Flowing northeast to the Bo Hai Sea from the Bayan Har Mountains, the Yellow River crosses a plateau blanketed with up to 300 meters (1000 feet) of fine, wind-blown soil. The soil is easily eroded, and millions of tons of it are carried away by the river every year. Some of it reaches the river’s mouth, where it builds and rebuilds the delta.

The Yellow River Delta has wandered up and down several hundred kilometers of coastline over the past two thousand years. Since the mid-nineteenth century, however, the lower reaches of the river and the delta have been extensively engineered to control flooding and to protect coastal development. This sequence of natural-color images from Landsat satellites shows the delta near the present river mouth at five-year intervals from 1989 to 2020.

Between 1989 and 1995, the delta became longer and narrower along a southeast-bending arc. In 1996, however, Chinese engineers blocked the main channel and forced the river to veer northeast. By 1999, erosion and settling along the old channel caused the tip of the delta to retreat, while a new peninsula had formed to the north.

The new peninsula thickened in the next five-year interval, and what appears to be aquaculture (dark-colored rectangles) expanded significantly in areas south of the river. By 2009, natural processes had shifted the river slightly more the north, and the shoreline northwest of the new river mouth had filled in considerably. This may be the outcome that the engineers were anxious to achieve: the land northwest of the newly fortified shoreline is home to an extensive field of oil and gas wells. Their protection is a primary concern.

By 2015, the new lobe of land near the new channel had grown considerably, even as parts of the old channel eroded. On the youngest land, different types of vegetation—notably the cordgrass Spartina alterniflora—have spread widely, creating dense new pockets of green in the 2020 image.

Although levees, jetties, and seawalls allow officials to slow erosion and direct the flow of the river, other challenges to protecting the delta’s natural wetlands and its agricultural and industrial development remain. Water and sediment flows to the delta have declined dramatically since the 1970s, due to both reduced rainfall and explosive urban and agricultural demand for water upstream. In the 1990s, the river sometimes ran dry well before reaching the delta.

These low- and no-flow periods are a huge problem in the lower reaches of the river and the delta. They severely damage wetlands and aquaculture and worsen the river’s water pollution problem. Ironically, they also increase the flood risk because when flows are low, sediment fills in the riverbed. The river becomes shallower and higher in elevation. In places, the river is already perched above the surrounding floodplain by as much as 10 meters (30 feet).