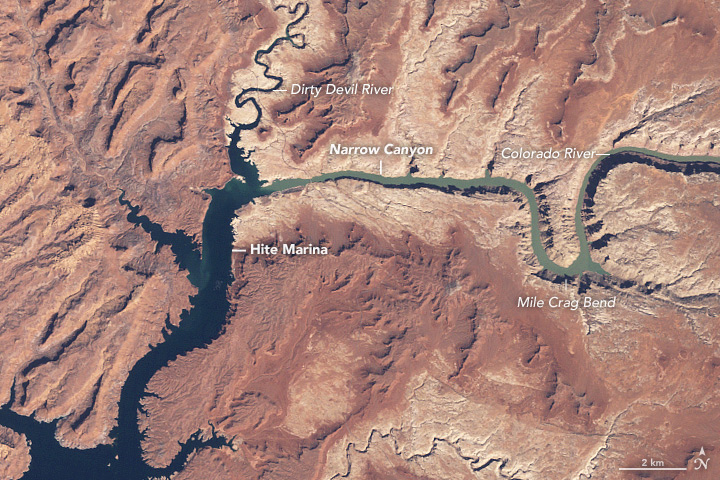 The Colorado River flows from the Rocky Mountains in Colorado through the southwestern United States. Along its route, the river passes through an elaborate water-management system designed to tame the yearly floods from spring snowmelt and to provide a reliable supply of water for residents as far away as California. The system is appreciated for the water it supplies, but criticized for the environmental problems and cultural losses that have resulted from its creation.

Among the dams on the Colorado is Arizona’s Glen Canyon Dam, which creates Lake Powell. The deep, narrow, meandering reservoir extends upstream into southern Utah. In the early 21st century, this modern marvel of engineering faced an ancient enemy: prolonged drought in the American Southwest. Combined with water withdrawals that many believe are not sustainable, the drought has caused a dramatic drop in Lake Powell’s water level.

Changes in the northeastern reaches of Lake Powell are documented in this series of natural-color images taken by the Landsat series of satellites between 1999 and 2021. The Colorado River flows in from the east around Mille Crag Bend and is swallowed by the lake. At the west end of Narrow Canyon, the Dirty Devil River joins the lake from the north. (At normal water levels, both rivers are essentially part of the reservoir.) Sunlight brightens plateaus and southeast-facing slopes, casting shadows on the northern and western faces of the rugged landscape. (Due to the angle of sunlight, this image may cause an optical illusion known as relief inversion.)

At the beginning of the series in 1999, water levels in Lake Powell were relatively high, and the water was a clear, dark blue. The sediment-filled Colorado River appeared green-brown. In the early years of this image series, water levels began to drop. The declines were first apparent in the side canyons feeding the reservoir which thinned and then shortened. By 2002, the lake level had dropped far enough that the exposed canyon walls created a pale outline around the lake.

Dry conditions and falling water levels were unmistakable in the image from April 13, 2003. Lake Powell’s side branches had all retreated compared to the previous year’s extents. Water levels in Narrow Canyon had dropped enough to show canyon floor features not visible in earlier images. In the image acquired on May 1, 2004, the reservoir’s northwestern branch is isolated from the main reservoir; the shallow water upstream could not crest raised areas in the lakebed.

Lake Powell’s water levels plummeted in early 2005, according to the U.S. Department of the Interior Bureau of Reclamation. The northwestern side branch of Lake Powell remained cut off from the rest of the reservoir. In the main body of Lake Powell, water pooled along its eastern edge, while large expanses of dry canyon floor were visible in the west.

In the latter half of the decade, the drought eased somewhat. Precipitation was better, but still slightly below normal in the Upper Colorado River Basin. The lake level began to rebound; only the 2008 image appeared to deviate from the trend toward rising water levels. While the lake was significantly higher in 2011 and 2012 than in 2005, a careful comparison of the side canyons reveals that the level was still not back to 1999 levels, when the lake was near full capacity.

The peak inflow to Lake Powell occurs in mid- to late spring, as the winter snow in the Rocky Mountains melts. Significant amounts of snowfall over the winter of 2010–2011 meant more water for Lake Powell, and this effect lasted into the spring of 2012. For five years after 2012, snow- and rainfall totals were generally low, as the region suffered through a persistent, long-term drought. 2018 brought some relief after a wet winter.

A century of river flow records combined with an additional four to five centuries of tree-ring data show that the droughts over the past two decades were not unusual; longer and more severe droughts are a regular part of the climate variability in that part of the continent. Global warming is expected to make droughts more severe in the future. Even in “low emission” climate scenarios (forecasts that are based on the assumption that future carbon dioxide emissions will increase relatively slowly), models predict precipitation may decline by 20-25 percent over most of California, southern Nevada, and Arizona by the end of this century. Precipitation declines combined with booming urban populations will present a significant challenge to Western water managers in the near future.