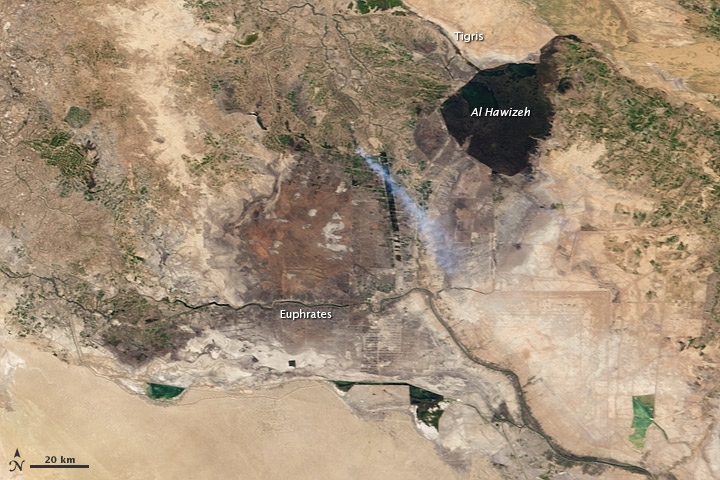 At the start of the twenty-first century, the once-lush, richly diverse wetlands of Mesopotamia had been decimated. In the decades leading up to the new century, hydro-engineering—dams for flood control and hydroelectricity, canals and reservoirs for agricultural irrigation—had greatly reduced the volume of the annual marsh-renewing floods. Then, in the 1990s, the marshes became a political pawn: former Iraqi leader Saddam Hussein drained large areas at least in part to punish the tribes living there, the Marsh Arabs, for participating in anti-government rebellions.

This series of images from the Moderate Resolution Imaging Spectroradiometer (MODIS) on NASA’s Terra satellite begins on February 28, 2000. Historically, spring runoff would have flooded Mesopotamia by this time of year; the wedge of land between the Tigris (flowing south from top center) and the Euphrates (flowing in from near left center) would have been dotted with ponds and verdant with reeds and other wetland plants. Instead, the area was reduced to a few small green patches and bare soil, varying in shades from purplish brown to pale beige. (The bright green vegetation is likely irrigated cropland, not marsh vegetation.) The largest remnant marsh, Al Hawizeh, straddles the Iran-Iraq border just east of the Tigris River (top right). Its dark color may result from the combination of standing water (dark blue), vegetation (dark green), and bare ground (brown). Between 2000 and 2003, this remnant shrinks further.

Following the Second Gulf War and the end of Saddam Hussein’s regime in 2003, Iraqis began demolishing the dikes and canals that had drained the marshes. By February 9, 2004, a dramatic transformation was underway in Mesopotamia. Several large marsh areas north and south of the Euphrates had been re-flooded, and the dry land south of Al Hawizeh Marsh was being systematically filled. These areas appear almost purely dark blue or nearly black, which indicates that standing water was present, but that vegetation was absent or extremely sparse. By 2005, additional areas were flooded, especially north of the Euphrates (near image center). In some places, the water appeared more greenish than it did in 2004; this could be because plants or algae were growing or because the water was shallower than it was the previous year.

In 2007 and 2008, the marshes stood out starkly from the surrounding bare ground. Interestingly, however, they appeared reddish brown, rather than the lush green color that vegetation commonly has in photo-like images such as these. However, the color is deceiving: an infrared-enhanced false-color image, in which even sparse vegetation appears neon green, shows that plants were growing in the marshes. The unusual color may be a unique characteristic of the type of plants (or algae) growing in the marshes, or it may be due to the mixed reflections from standing water (perhaps shallow or muddy), soggy ground, and different kinds of plants.

As the decade drew to a close, the recovering marshes faced new threats, including new dam construction upstream and drought. The amount of flooding visible in the 2009 image was considerably less than in 2008; not only the marshes, but also the adjacent irrigated crop areas appeared far less lush than they did the previous year. The 2009 drought had a severe impact on winter and spring crops in Iraq. The image from 2010 seems to tell a different story, however. While the marshes appeared to have shrunk still further, the irrigated agricultural areas in the center of the image appeared more extensive and greener than they were the previous year.

A United Nations Environment Program assessment of the Iraq marsh restoration in 2006 concluded that roughly 58 percent of the marsh area present in the mid-1970s had been restored in the sense that standing water was seasonally present and vegetation was reasonably dense. Two years of field research by Iraqi and American scientists concluded that there had been a “remarkable rate of reestablishment of native macroinvertebrates, macrophytes, fish, and birds in re-flooded marshes.” However, the lack of connectedness among the various re-flooded marshes remained a concern for species diversity and local extinction. In addition, the volume of water that flowed into the marshes in the first years of restoration may not be able to be sustained as the country stabilizes and economic and agricultural activity resume. As a result, the ultimate fate of Mesopotamian marshes is still uncertain.