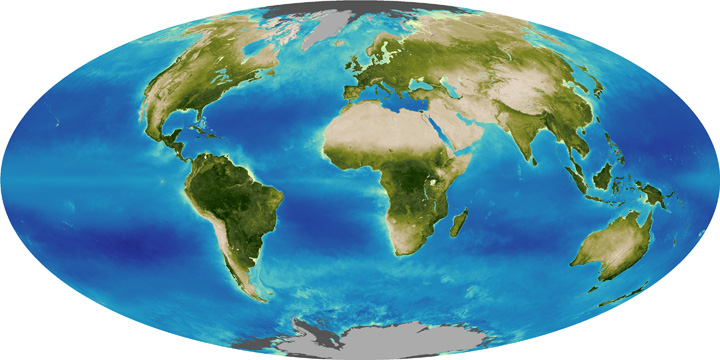 Life is an integral part of the Earth system. Living things influence the composition of the atmosphere by “inhaling” and “exhaling” carbon dioxide and oxygen. They play a part in the water cycle by pulling water from the soil and the air, and they help put it back again by exhaling water vapor and aerating the soil so rain can soak into the ground. They regulate ocean chemistry by taking carbon out of the atmosphere. Earth would not be the planet that it is without its biosphere, the sum of its life.

But life is not a constant thing, as illustrated in this series of images. The images show the distribution of chlorophyll over the Earth’s ocean surface averaged over a year. On land, the images represent the density of plant growth. The darkest green areas, where plant growth is greatest, tend to be concentrated in tropical regions around the equator, where rainfall and sunlight are abundant. Since the images are an annual average, seasonal patterns have been erased. The intense summer growing season at higher latitudes is blended with the winter season when little grows, resulting in a mid-range average vegetation index value.

In the ocean, high chlorophyll concentrations are concentrated in areas where tiny, plant-like organisms (phytoplankton) thrive. The highest chlorophyll concentrations are in cold polar waters or in places where ocean currents bring cold water to the surface, such as around the equator and along the shores of continents. It is not the cold water itself that stimulates the phytoplankton. Instead, the cool temperatures are often a sign that the water has welled up to the surface from deeper in the ocean, carrying nutrients that have built up over time. In polar waters, nutrients accumulate in surface waters during the dark winter months when plants can’t grow. When sunlight returns in the spring and summer, the plants flourish in high concentrations.

The average productivity of the biosphere changes little from year to year, but there are small variations. Plants require four things to grow: nutrients, light, water, and moderate temperatures. When any one of these things changes, plant growth will change too. On land, the interannual changes in plant growth are most evident in marginal areas, where small changes in water or temperature have the greatest impact on plant growth. The Australian Outback, the African Sahel, and the Steppes of Central Asia all show annual variations in plant growth in this series. The variations are probably related to changes in temperature or rainfall.

Interannual changes in the ocean are more difficult to interpret. Ocean productivity (as illustrated by the distribution of chlorophyll) depends on ocean temperatures and the availability of nutrients, usually brought to the surface by ocean currents and mixing. Ocean chlorophyll concentrations can change when ocean currents shift or the temperature changes. A drop in chlorophyll could occur if more zooplankton (small animals) are grazing in an area. Finally, the satellite measurement itself may be influenced by changes in weather patterns. Winds could churn the ocean, pushing phytoplankton below the surface where the satellite cannot measure them, or clouds may block the satellite’s view during short bloom events, when chlorophyll spikes.

Measurements of global chlorophyll and vegetation are valuable to scientists because they provide insight into the carbon cycle. Scientists use ocean chlorophyll and vegetation measurements to determine the planet’s net primary productivity: how much carbon is being used by the plants to grow. Carbon cycles through the oceans, soil and rocks, plants on land and in the ocean, and atmosphere. The build up of carbon dioxide released into the atmosphere by burning fossil fuel is the primary cause of global warming. The global biosphere has been helping to offset some of the excess carbon dioxide people have been pumping into the atmosphere.

The maps are made from ocean chlorophyll data collected by the SeaWiFS satellite and vegetation data collected by NOAA satellites and analyzed by the Global Inventory Modeling and Mapping Studies (GIMMS) project at NASA’s Goddard Space Flight Center.