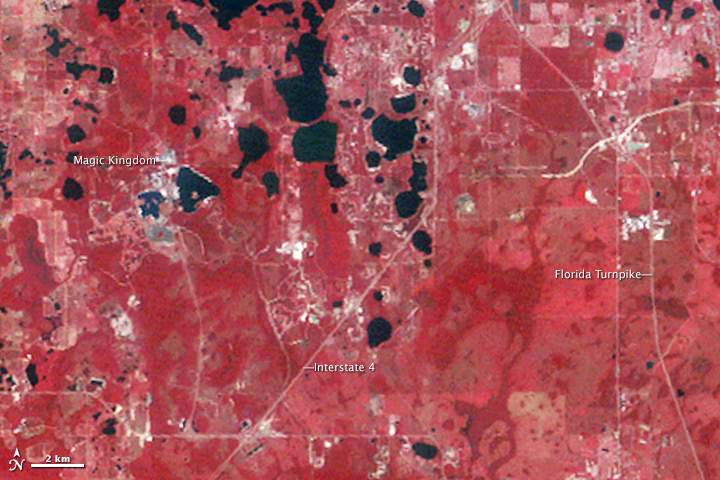 Orlando, Florida, is reported to be the most visited destination in the United States. In 2014, more than 62 million people flocked to this centrally located city in the Sunshine State. And while the exact number of visitors fluctuates from year to year, tourism has had a marked impact on the landscape.

The spread of development is visible in this series of false-color images of greater Orlando, southwest of the city’s downtown area. Acquired with the Landsat series of satellites between 1972 and 2014, the scenes are shown in green, red, and near-infrared light, a combination that helps differentiate components of the landscape. Water is black, vegetation is red, and urban areas are brown to gray. (Note that the resolution of Landsat imaging instruments was lower at the beginning of the time series than at the end.)

Scouting in the 1960s for a location to build his namesake resort, Walt Disney settled on an area in Central Florida where highway infrastructure was already in place—near the confluence of the Florida Turnpike and Interstate 4. The landscape was primarily swampland. To prepare for the park, engineers moved about 6 million cubic meters of earth and constructed a substantial drainage system.

At the time that the first image in our series was acquired (September 1972), the Magic Kingdom—the first of Walt Disney World’s four theme parks—had been open for nearly a year. Bay Lake (southeast of the Magic Kingdom) had already been drained and refilled with clear water, then connected to the artificial Seven Seas Lagoon to the west.

The resort continued to expand over four decades with the opening of three more theme parks: Epcot in 1982; Disney’s Hollywood Studios in 1989; and Animal Kingdom in 1998. By 2014, the resort covered more than 100 square kilometers (40 square miles), about same area as the city of San Francisco.

Other theme parks also took shape during this period, with the opening of SeaWorld Orlando in 1973 and Universal Studios in 1990. Universal added its Island of Adventure expansion in 1999, while SeaWorld’s Discovery Cove opened in 2000. According to the Orlando Sentinel, the three theme park complexes combined for more than 72 million visits in 2014.

With the growth of theme parks came the growth of businesses and infrastructure to accommodate the influx of visitors. As you flip through the images above, you can see shopping malls, hotels, and other service industries filling in the space along the major highways, as well as the paving of many secondary roads. However, not everyone in the area is just a visitor. Schools, neighborhoods, and businesses were also built to support the more area’s more permanent residents.

One such residential area is Celebration, an unincorporated, planned community established in 1994 that covers 28 square kilometers (11 square miles) of engineered swampland just south of the theme parks. U.S. Census Bureau data from 2010 reported that 7,427 people lived in Celebration, 4,691 more people than reported in the 2000 Census.

The population of the greater Orlando area (including areas beyond the scope of these images) has been growing too. The population of the Orlando metro area in 1970 was just over 500,000 people, according to the U.S. Census Bureau. As of July 1, 2014, more than 2.3 million people were estimated to live there. According to news reports, housing developers in Orange County have struggled to keep up with demand.