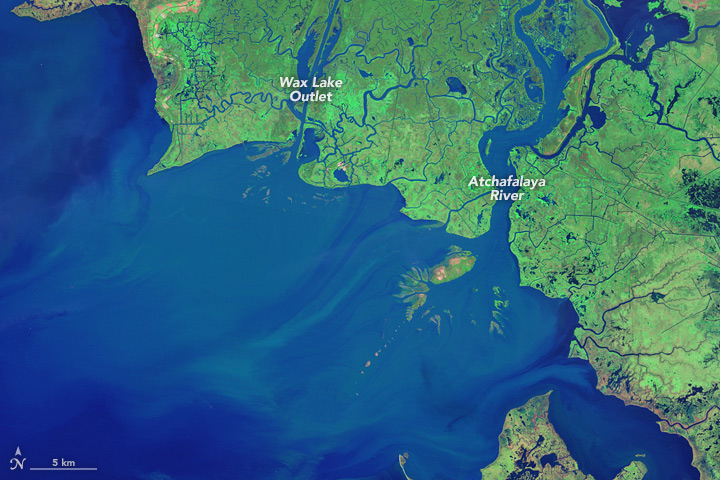 The delta plain of the Mississippi River is disappearing. The lobe-shaped arc of coastal land from the Chandeleur Islands in eastern Louisiana to the Sabine River loses a football field’s worth of land every hour. Put another way, the delta has shrunk by nearly 5,000 square kilometers (2,000 square miles) over the past 80 years. That’s as if most of Delaware had sunk into the sea.

Though land losses are widely distributed across the 300 kilometer (200 mile) wide coastal plain of Louisiana, Atchafalaya Bay stands as a notable exception. In a swampy area south of Morgan City, new land is forming at the mouths of the Wax Lake Outlet and the Atchafalaya River. Wax Lake Outlet is an artificial channel that diverts some of the river’s flow into the bay about 16 kilometers (10 miles) west of where the main river empties.

This series of false-color satellite images chronicles the growth of the two deltas between 1984 and 2017. All of the images were acquired by instruments on Landsat satellites: the Thematic Mapper on Landsat 5, the Enhanced Thematic Mapper Plus on Landsat 7, and the Operational Land Imager on Landsat 8. A combination of shortwave infrared, near infrared, and green light was used to accentuate differences between land and water. Water appears dark blue; vegetation is green; bare ground is pink. All of the images were acquired in autumn, when river discharge tends to be low.

Even with the reduced flow, the Atchafalaya carries enough sediment to build land. While geologists first noticed mud deposits building up in Atchafalaya Bay in the 1950s, new land first rose above the water line in 1973 after a severe flood. Since then, both deltas have grown considerably. According to one estimate by scientists from Louisiana State University (LSU), the Atchafalaya and Wax Lake Outlet deltas have combined to grow by 2.8 square kilometers (1 square mile) per year.

The rate of growth has varied considerably, mainly due to the timing of major floods and hurricanes. Floods transport large volumes of extra sediment to Atchafalaya Bay, while hurricanes redistribute sediment within the bay and transport it offshore into deeper waters. Hurricanes also destroy coastal vegetation that would otherwise protect land from erosion.

The two deltas added a combined 34 square kilometers (13 square miles) of land between 1989 and 1995, for instance, but lost 2 square kilometers between 1999–2004, according to the LSU team. The land loss coincided with a period when hurricanes Allison, Isidore, and Lili battered Atchafalaya Bay and there were no major floods to replenish sediments. 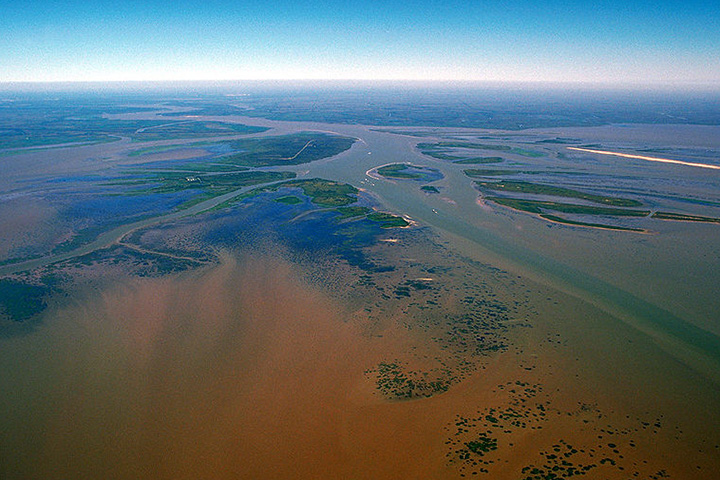 As is typical of deltas in southern Louisiana, the Atchafalaya and Wax Lake Outlet deltas have grown southward into the Gulf of Mexico. While the newer, outer lobes are periodically submerged by the sea and are still free of vegetation, various types of plants—including reeds and willows—colonize the higher elevations of the sandbars. Vegetation is critical to maintaining new land because roots stabilize sediment and prevent erosion.

The Atchafalaya delta has grown at a faster rate than its neighbor—about 1.6 square kilometers (0.6 square miles) per year, versus 1.2 square kilometers (0.46 square miles) per year for the Wax Lake delta. The difference is due to regular dredging and channel widening on the lower Atchafalaya, which delivers extra sediment to its delta. In the sequence of images above, the emergence of new dredged islands—which appear pink—is particularly noticeable between 1993 and 1994. Due to the lack of dredging, Wax Lake delta is more natural in character, with a more symmetric, lobate shape.

So why are the deltas in Atchafalaya Bay growing while the rest of Louisiana’s coastline is retreating? The key reason is that the Atchafalaya delivers sediment to the coast at a pace that allows it to settle into shallow water and to maintain marshes. In contrast, an extensive series of levees keep the Lower Mississippi’s water flowing in a narrow channel that whisks water and sediment past natural floodplains. Instead of building new land along the mouth of the Mississippi, the controlled river sends jets of sediment-rich water directly into the relatively deep waters of the Gulf of Mexico and toward the edge of the continental shelf.

With sea level rising rapidly due to natural geological processes, climate change, and human activities, predictions for the future of the Mississippi Delta are grim. Even the land gains in Atchafalaya Bay will do little to offset the losses elsewhere, according to geologists. Most scientists expect the Mississippi Delta Plain to lose roughly 5,000 square kilometers of land over the next 50 years.

“We are looking carefully at the Wax Lake and Atchafalaya deltas as models for building new land and preserving some of our coastal marshlands,” said Harry Roberts, director of the Coastal Studies Institute at LSU. “If we start diverting significant portions of the water and sediment from the main channel of the Mississippi River into adjacent wetlands, lakes, and bays—as happens now in Atchafalaya Bay—we’ll be taking an important first step toward saving a significant part of Louisiana’s coastal plain.”