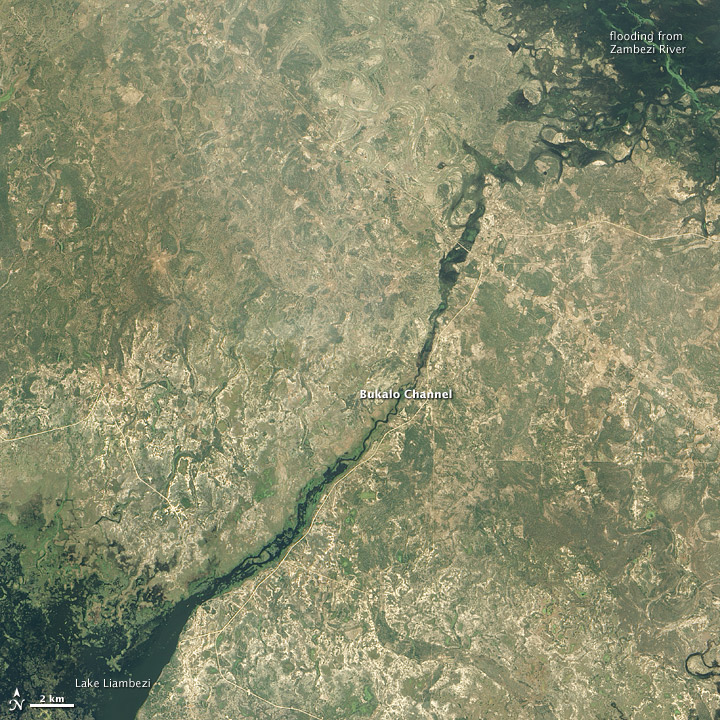 In easternmost Namibia lies Lake Liambezi. Throughout the 1960s and 1970s, the lake regularly received water from three directions. Water flowed permanently from the west via the Linyanti River. In most years, seasonal flood waters arrived from the southeast via the Chobe River. And every two to three years, floodwaters coursed through the Bukalo Channel in the northeast. The 1980s and 1990s saw much drier conditions, and the Bukalo Channel dried up, as did Lake Liambezi.

Wetter conditions returned to the region after the turn of the twenty-first century, bringing a gradual recovery of Lake Liambezi. In 2009, flood waters once more flowed through Bukalo Channel. Water again flowed through the channel in 2011, when the Advanced Land Imager (ALI) on NASA’s Earth Observing-1 (EO-1) satellite passed overhead. ALI captured this natural-color image on April 16, 2011.

The Bukalo Channel forms a long, green strip between the Zambezi River floodplain in the northeast and Lake Liambezi in the southwest. The water flows through braided channels that narrow midway between the floodplain and the lake. Vegetation lines the channel, and a patchwork of farmed land appears on either side of the channel.

By the time floodwaters again flowed through the Bukalo Channel in 2009, the waterway had since been converted to farmland. Long accustomed to the channel being dry, locals were surprised not only by the arrival of water, but also by the water-dependent species that arrived with it. New Era, a Namibian newspaper, reported from one village that “a herd of hippos has taken residence in reeds that have sprouted near a church while crocodiles have apparently been spotted at the bridge.”

Acquired September 7, 2010, and September 13, 2010, these false-color images show floodwaters rising along a massive lake that branched off the Indus River.