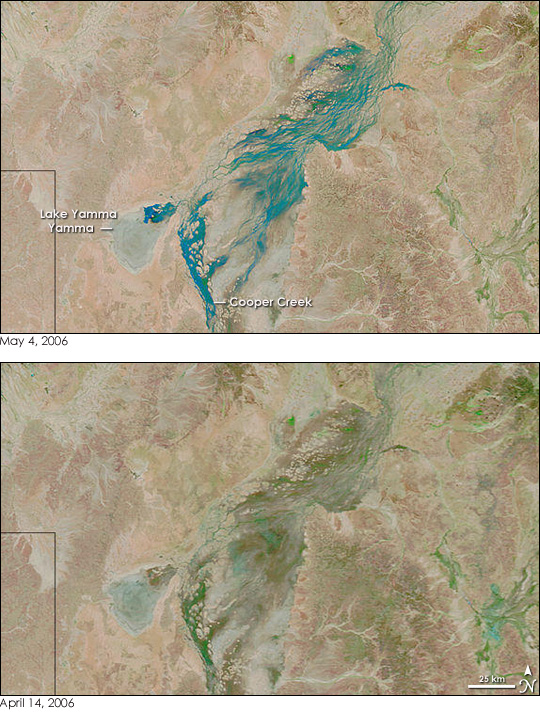 Near the eastern border of Australia’s dry interior, an intricate network of riverbeds and streams cut across the ancient clay soil, a floodplain that water forgot. Called the Channel Country, the region receives very little rain and only flows with water after summer monsoon rains drench the highland to its north and east. The slow-moving flood drains into the dry streams and rivers, pooling in sometimes-present lakes, such as Lake Yamma Yamma and Lake Eyre. One of the larger channel rivers is Cooper Creek, shown in these images collected by the Moderate Resolution Imaging Spectroradiometer (MODIS) on NASA’s Terra satellite on May 4, top, and April 24, 2006, bottom.

These images show the channel system that is Cooper Creek as it fills with seasonal floods. On April 14, only the slightest hint of water, traces of green vegetation along the channels, can be seen in Cooper Creek. Lake Yamma Yamma is salt-pan white from mineral-sediment deposit left after its waters have evaporated time and time again. In the large image taken on April 14, the slow-moving flood fills the upstream reaches of Cooper Creek. By May 4, the flood reached the segment of the creek around Lake Yamma Yamma. Blue water defines the channels and has started to spill into the lake. The flood was welcome in the region, which has been in the grip of drought since 2002, reported the Australian Broadcasting Company. The land around Cooper Creek is primarily used as range for livestock.

Heavy Rains and Floods in Australia