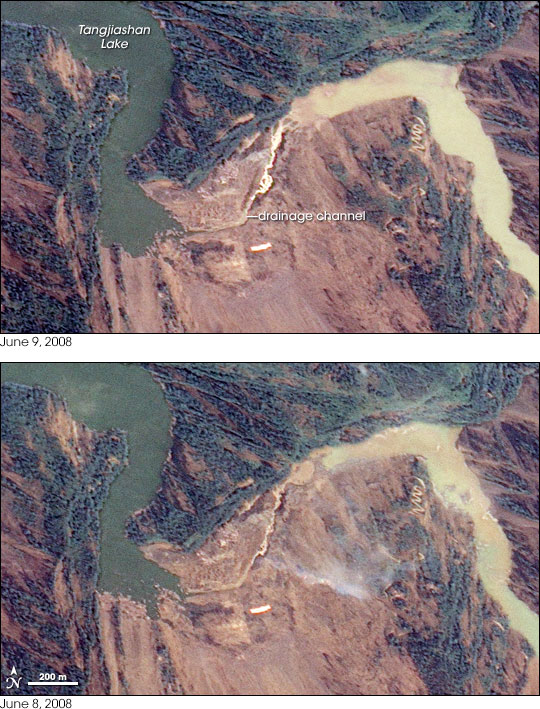 Chinese engineers walk a fine line as they try to drain water from Tangjiashan Lake, which has been building behind a landslide dam in Beichuan County. If they drain water too quickly, the flow could erode through the landslide, and the rapid flow would cause devastating floods downstream. If they drain the water too slowly, the lake will grow at dangerous levels, putting pressure on the possibly unstable natural dam. If the dam bursts, a wall of water would barrel down the river. So engineers dug a drainage channel to ease water from the dangerous lake. On June 7, 2008, water began to flow into the channel, reported Xinhua, China’s official news agency.

These true-color, photo-like images show water draining through the channel on June 8 and June 9, 2008. The stream of water flowing through the channel widened between the two days. The water is murky brown, a sign that it may be eroding the earthen channel as it flows over the landslide. The lake also grew between June 8 and June 9, as evidenced by the changing shape of the southern shoreline. Water was flowing into the lake 4.6 times faster than it was draining out on June 9, reported Xinhua.

Soldiers were widening the channel and building a second channel to drain the lake more quickly, said Xinhua. The lake began to form on May 12, 2008, when a magnitude 7.9 earthquake triggered a massive landslide that blocked the flow of the Jianjiang River. Officials feared that aftershocks would destabilize the landslide dam or that the lake would eventually overflow or burst through the landslide. Approximately 1.3 million people live downstream from the lake.

Acquired on August 3, 2011, this natural-color image shows the spillway relieving pressure on the lake created by a January 2010 landslide in the Hunza Valley of northern Pakistan.