A Panoramic View of the Emigrant Gap Fire, California 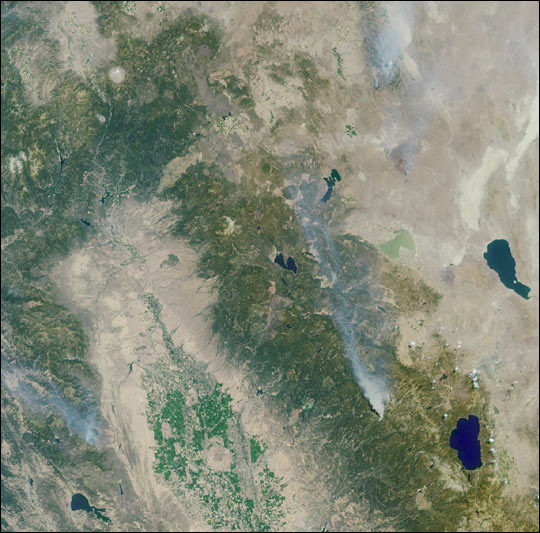 These Multi-angle Imaging SpectroRadiometer (MISR) images of the Central Valley and the Sierra Nevada Mountains show several smoke plumes from wildfires burning throughout Northern California on August 13, 2001. The overview image represents an area of 336 kilometers by 332 kilometers, and was acquired by MISR’s 46-degree backward-looking camera.

The most prominent plume arises from the Emigrant Gap Fire, located about 40 kilometers west of Lake Tahoe. The animated panorama uses different MISR cameras to enable this plume to be seen from multiple vantage points as the satellite flies overhead. The animation begins with the view from MISR’s 70-degree forward camera, which captured the plume from the north, and moves through six additional camera angles before reaching the 60-degree backward camera, which imaged the plume’s southern face. The frames in the animated image were acquired over a time period of about six minutes, and include an area of 79 kilometers by 105 kilometers. The apparent northward displacement of the terrain as the animation plays is due to geometric parallax resulting from the topographic elevation of the scene and the manner in which the images from the different cameras are superimposed. Features with the highest altitudes exhibit the most parallax. A bright "flash" from several water bodies can also be seen at one of the camera angles; this particular angle is catching sunglint from these mirror-like surfaces.

The Emigrant Gap Fire started during the early afternoon of August 12 and was the result of human activity. It was contained within four days, and burned about 2,500 acres in total. Also visible in the overview image are smoke plumes from the Blue Complex Fires (upper right) and the Trough Fire (lower left). The round hill in the Central Valley is Sutter Buttes, and the single snowcapped peak in the upper left is Mount Shasta.

As of August 30, the US Forest Service reported the total year-to-date area burned in Northern California to be in excess of 200,000 acres, or 800 square kilometers.

Multi-angle views of the Fire in Los Alamos, New Mexico, 9 May 2000