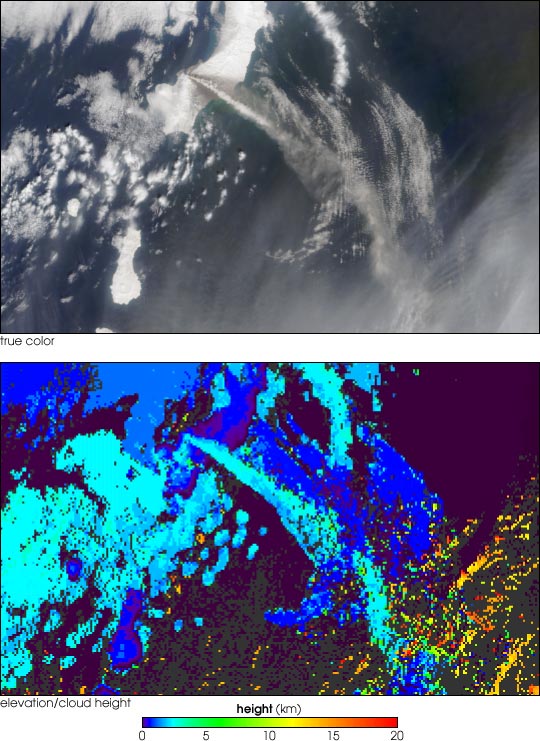 In the upper panel of the still image pair, this scene is displayed as a natural-color view from MISR’s vertical-viewing (nadir) camera. The white and brownish-grey plume streaks several hundred kilometers from the eastern edge of Paramushir Island toward the southeast. The darker areas of the plume typically indicate volcanic ash, while the white portions of the plume indicate entrained water droplets and ice. According to the Kamchatkan Volcanic Eruptions Response Team (KVERT), the temperature of the plume near the volcano on April 22 was -12° C.

The lower panel shows heights derived from automated stereoscopic processing of MISR’s multi-angle imagery, in which the plume is determined to reach heights of about 2.5 kilometers above sea level. Heights for clouds above and below the eruption plume were also retrieved, including the high-altitude cirrus clouds in the lower left (orange pixels). The distinctive patterns of these features provide sufficient spatial contrast for MISR’s stereo height retrieval to perform automated feature matching between the images acquired at different view angles. Places where clouds or other factors precluded a height retrieval are shown in dark gray.

The “fly-over” animation provides a view of the plume and the surrounding clouds from MISR’s multiple camera angles. Most of the apparent motion in the animation is due to geometric parallax between the view angles, but some represents real cloud movement that occurs over the seven minutes during which all nine MISR cameras observe the scene. The frames of the animation consist of data acquired by the 70-degree, 60-degree, 46-degree and 26-degree forward-viewing cameras in sequence, followed by the images from the nadir camera and each of the four backward-viewing cameras, ending with the view from the 70-degree backward camera.

The Multi-angle Imaging SpectroRadiometer observes the daylit Earth continuously from pole to pole, and every 9 days views the entire globe between 82 degrees north and 82 degrees south latitude. The MISR Browse Image Viewer provides access to low-resolution true-color versions of these images. These data products were generated from a portion of the imagery acquired during Terra orbit 17776. The panels cover an area of approximately 296 kilometers x 183 kilometers (still images) and 185 kilometers x 154 kilometers (animation).

Since April 18, 2003, the Chikurachki Volcano in the Kuril Islands has continued to erupt, spreading plumes of ash over the Pacific Ocean. This recent image is from May 13, 2003.

These images provide a stereo (3-D) view of the Eyjafjallajökull Volcano’s eruption plume, illustrating how high the plume was compared to the surrounding clouds on April 19, 2010.

These images provide a stereo (3-D) view of the Eyjafjallajökull Volcano’s eruption plume, illustrating how high the plume was compared to the surrounding clouds on April 19, 2010.