Flooding Along the Nile River 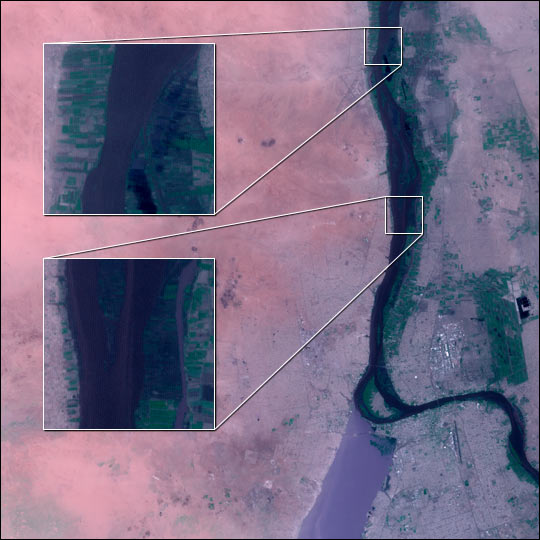 Although flooding along the Nile River in the African country of Sudan is an annual event, this year’s river levels are the highest in more than 20 years. About 70,000 acres of farmland have been inundated by the rising river, displacing roughly 7,000 families from their homes. Downstream in Egypt, public works officials are confident that the the run-off canals behind the Aswan High Dam can carry enough water to avert flooding in their country. Several years of above-average rainfall along the Nile River have already created several new lakes in Egypt.

The Advanced Spaceborne Thermal Emission and Reflection Radiometer (ASTER), the zoom lens aboard NASA’s Terra satellite, acquired this high-resolution view of the Sudanese capital of Khartoum and flooded farmland along the Nile on August 30, 2001. The “pseudo true-color” image is a combination of near-infrared and visible light data which simulates a photograph taken from space. The city of Khartoum is at the lower right, at the confluence of the White (left) and Blue (right) Nile Rivers. Flooded farmland along the banks of the Nile appears dark blue. The two inset images show the flooding at a spatial resolution of 15 meters per pixel--ASTER’s full resolution. The surrounding desert is colored pink.

Flooding is a particularly severe problem in this region because most human settlements are along rivers. An earlier sequence of images from the Multi-angle Imaging Spectroradiometer (MISR), another instrument aboard Terra, shows seasonal fluctuation of the Nile.