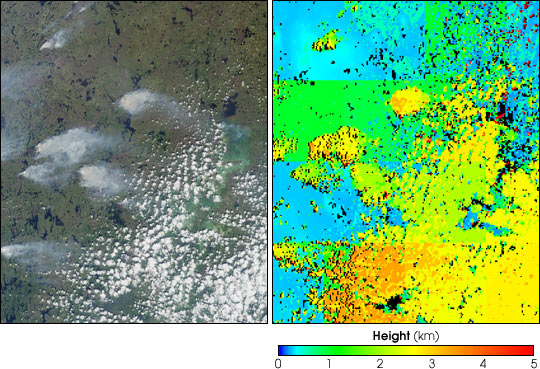 Fire season in Manitoba, Canada, lasts from April until October. These images of the northwestern part of the province show numerous smoke plumes from fires caused by lightning strikes hitting the surface. The data were acquired by the Multi-angle Imaging SpectroRadiometer (MISR), flying aboard NASA's Terra satellite, on June 20, 2001.

On the left is a true-color image acquired by MISR's vertical-viewing (nadir) camera. The area covered measures 232 kilometers by 80 kilometers. The greenish area on the righthand side of the image, partially obscured by clouds, is Southern Indian Lake. This landscape is predominantly boreal, and contains deciduous and evergreen conifer forests, deciduous broadleaved forests, fens, and lakes. Tree species found within the area include white and black spruce, jack pine, tamarack, willow, and birch. Human population density is sparse, averaging about one person per 10 square kilometers.

During the fire season, information is updated daily on the Manitoba Conservation website (http://www.gov.mb.ca/natres/fire/). The large plume northwest of Big Sand Lake, above image center, was reported to be under control on June 20, whereas the plume at lower left, to the west of Gold Sand Lake, was classified "out of control." In the next two days, an additional 27 out-of-control fires in the area were started by lightning strikes arriving with a slow-moving northerly cold front. By June 29, all but six of the fires had been brought under control.

The picture on the right is a height field derived using automated computer processing of the data from several of MISR's cameras. The results indicate that the smoke plumes reach altitudes a few kilometers above the surface terrain, nearly as high as the cumulus cloud field in the lower right quadrant. The height retrievals make use of geometric parallax associated with observing the features at multiple angles. A few artifacts are visible in this early version of the MISR stereoscopic product, e.g., linear discontinuities in the elevation field, isolated elevation "spikes" (appearing as red), and black areas where no result was obtained. Nevertheless, this first version of the algorithm, which is designed to operate autonomously and rapidly without human intervention, is doing a good job at detecting the smoke plumes and cloud field. Improvements are anticipated in the future. The product was generated as part of operational processing at the NASA Langley Atmospheric Sciences Data Center.

For more details on boreal wildfires, read Evolving in the Presence of Fire.

A Panoramic View of the Emigrant Gap Fire, California 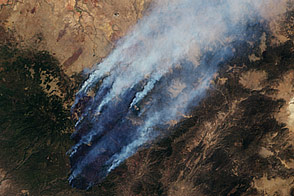 This image and animation, taken on June 7, provide nine perspectives on the Wallow Fire in eastern Arizona.