Multi-angle views of the Fire in Los Alamos, New Mexico, 9 May 2000 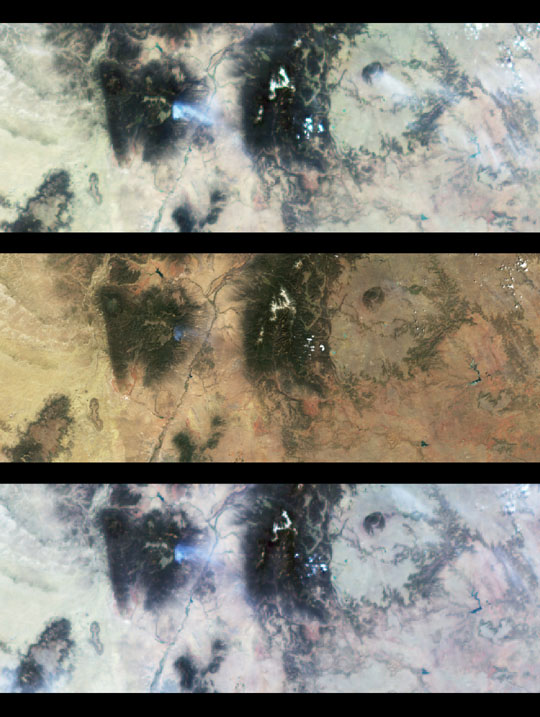 These true-color images covering north-central New Mexico capture the bluish-white smoke plume of the Los Alamos fire, just west of the Rio Grande. The middle image is a downward-looking (nadir) view, taken by the Multi-angle Imaging SpectroRadiometer (MISR) instrument on NASA's Terra satellite. As MISR flew from north to south, it viewed the scene from nine different angles. The top image was taken by the MISR camera looking 60 degrees forward along the orbit, whereas the bottom image looks 60 degrees aft.

The plume stands out more dramatically in the steep-angle views. Its color and brightness also change with angle. By comparison, a thin, white, water cloud appears in the upper right portion of the scene, and is most easily detected in the top image. MISR uses these angle-to-angle differences to monitor particulate pollution and to identify different types of haze. Such observations allow scientists to study how airborne particles interact with sunlight, a measure of their impact on Earth's climate system. The images are about 400 km (250 miles) wide. The spatial resolution of the nadir image is 275 meters (300 yards); it is 1.1 kilometers (1,200 yards) for the off-nadir images. North is toward the top.

MISR was built and is managed by NASA's Jet Propulsion Laboratory, Pasadena, CA, for NASA's Office of Earth Science, Washington, DC. The Terra satellite is managed by NASA's Goddard Space Flight Center, Greenbelt, MD. JPL is a division of the California Institute of Technology.

Multi-angle views of the Mid Atlantic

No instrument like the Multi-angle Imaging SpectroRadiometer (MISR) has flown in space before. Viewing the sunlit Earth simultaneously at nine widely spaced angles, MISR collects global images with high spatial detail in four colors at every angle.