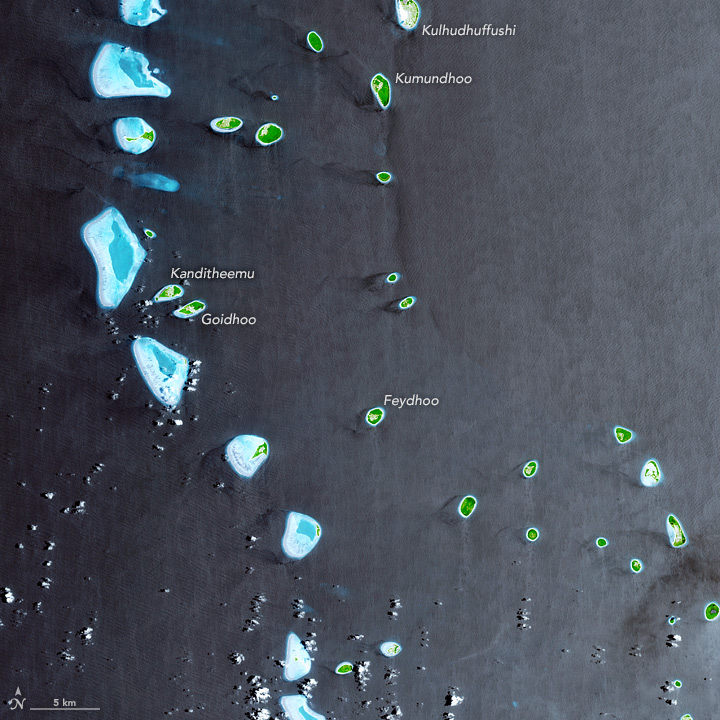 The palm tree-fringed beaches of the Maldives give the appearance of an island paradise. But behind the tiny island nation lies a more complicated story.

The archipelago numbers 1,190 coral islands grouped into 26 atolls. Tourism powers the country’s economy, as 80 of its islands contain resorts. But its most lucrative asset—proximity to the azure seas—threatens to bring its downfall. The Maldives stands to lose much to sea-level rise, according to the United Nations.

As the smallest Asian country, the Republic of Maldives has a total population the size of a modest European city. The islands rise just a smidgeon above the Indian Ocean: roughly 80 percent of the country stands no more than 1 meter (3 feet) above sea level, according to the CIA World Factbook.

The nation was one of the first to warn of the effects of climate change that are already taking place. In 2009, then-president Mohamed Nasheed made international headlines by holding an underwater cabinet meeting in scuba attire to draw attention to the issue.

During bad storms, knee-deep water has inundated some islands. Malé, the capital and home to one-third of the nation’s residents—as well as multi-million dollar concrete stormwalls—has borne the brunt of several large storms in the past few decades. The city has also struggled to contain vector-borne diseases like dengue fever. (Heavy rains leave behind shallow pools where disease-spreading mosquitoes lay their eggs.)

This image was acquired on April 3, 2013, by the Advanced Spaceborne Emission and Reflection Radiometer (ASTER) aboard the Terra satellite. Note: the synthetic natural color image, which combines several different spectral ranges to simulate the look of natural color, makes the islands appear slightly brighter than would an aerial photograph.

The Maldives rise just a few meters above the surrounding ocean.

Preparing for Rising Seas in the Maldives

A new artificial island near Malé could be a destination for people trying to escape rising waters on lower-lying islands.