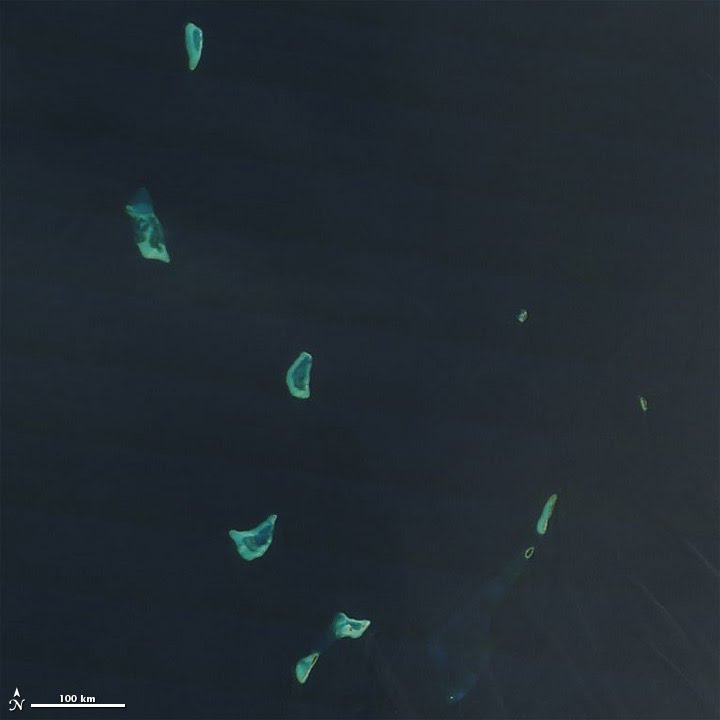 In the Arabian Sea, roughly 200 kilometers (120 miles) off the west coast of southern India, are the Lakshadweep Islands. The island chain consists of 27 islands along with coral atolls and sand banks. Lakshadweep’s coral atolls glow iridescent blue-green in this natural-color scene. The Moderate Resolution Imaging Spectroradiometer (MODIS) on NASA’s Terra satellite acquired this image on February 19, 2012.

The islands and atolls might appear scattered, but they all lie along a prominent north-south submarine ridge. Geologists have noticed that the alignment of the Lakshadweep ridge looks like a continuation of the Aravalli Range, a mountain chain running through the Indian state of Rajasthan. Some geologists have speculated that the islands might be a submerged extension of that chain.

The Lakshadweep ridge rises from a depth of more than 2,000 meters (6,500 feet) below sea level, and submarine surveys indicate that the ridge is probably steeper on its eastern flank than on its western flank. At the surface, the coral atolls show consistent differences between their eastern and western sides. Most of the saucer-shaped lagoons in Lakshadweep are confined to the western sides of the islands. Reefs exist on the eastern shores, but the shallow, rocky terrain has likely stunted them.

Despite stunted eastern reefs, the Lakshadweep islands make a pretty picture, whether from the sky or the ground. Glistening white sand beaches ring the islands, and most of the inhabited islands sport abundant coconut trees. But no waterfalls adorn the Lakshadweep Islands. They rise only a few meters above sea level, and their terrain is too porous to allow lakes and rivers to form.

Only 10 or 11 of the islands are inhabited, but human presence in the Lakshadweep Islands extends back centuries. Located along a heavily traveled sea route between West Asia and Africa on one side, and South Asia and the Far East on the other, the islands likely served as landmarks and resting places in emergencies. Evidence of centuries-old human habitation includes Buddhist shrines, pottery shards dating back to 1500 B.C., and a hoard of more than 400 Roman coins. From the second century A.D. 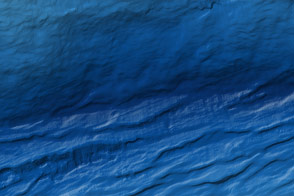 Islands off the Croatian Coast

Acquired October 2, 2002, this natural-color image shows islands off the coast of Croatia, in the Adriatic Sea.