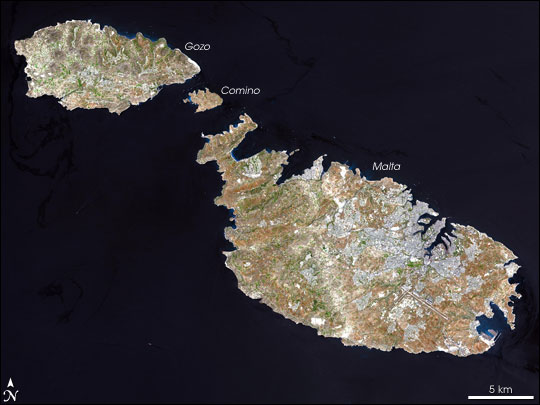 Malta, an independent republic, consists of a small group of islands—Malta, Gozo, Kemmuna, Kemmunett, and Filfla—located in the Mediterranean Sea south of Sicily, with a total area of 316 square kilometers. The capital and leading port of the country is Valletta, which appears as a gray patch around the two deep inlets on Malta’s northern coastline. About 400,000 people live on this island nation. The islands of Malta consist of low-lying coralline limestone plateaus surrounded by impermeable clay slopes. The highest point is 239 meters above sea level.

The many ancient monuments and remains on Malta attest to the great age of its civilization. Remains from Stone Age and Bronze Age peoples have been found in subterranean burial chambers. The islands became a Phoenician colony about 1000 B.C. They were later occupied by the Greeks, who called the colony Melita, and later the islands passed successively into the possession of Carthage and Rome. The islands were occupied by Arabs in 870 A.D. A Norman army conquered the Maltese Arabs in 1090, and Malta was later made a feudal fief of the kingdom of Sicily. In 1530 Holy Roman Emperor Charles V granted Malta to the Knights of Saint John of Jerusalem, who ruled the islands until the 19th century. In 1798 Napoleon invaded and occupied the islands during his Egyptian campaign. Unwilling to be ruled by France, the Maltese appealed to Britain, and in 1799 British naval officer Horatio Nelson besieged Valletta and compelled the withdrawal of the French. In 1814 Malta became part of the British Empire as a crown colony.

This natural-color image was acquired on July 29, 2001, by the Advanced Spaceborne Thermal Emission and Reflection Radiometer (ASTER) aboard NASA’s Terra satellite.