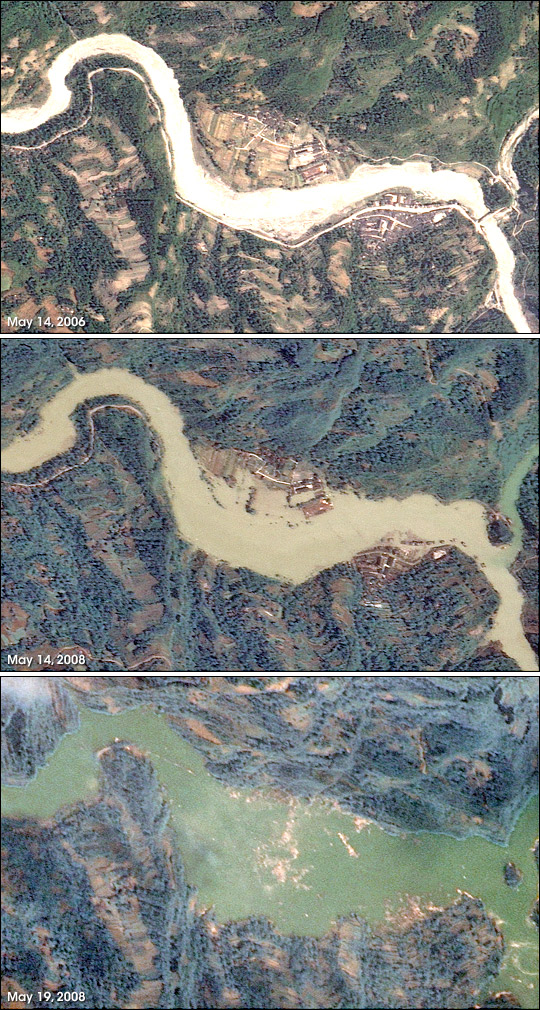 Within days of the magnitude 7.9 earthquake that shook China’s Sichuan Basin, floods became a hazard. The earthquake and its aftershocks sent earth and rock tumbling down mountains into rivers, creating natural dams behind which lakes quickly built up. As of May 19, 2008, 21 lakes had formed throughout the basin, said China Daily. This series of images, captured by Taiwan’s Formosat-2 satellite, shows the formation of one such lake (Yansai Lake) in Beichuan County, one of the most severely affected quake regions. The lake was forming in a mountain valley upstream of the small city of Beichuan.

Acquired on May 14, 2006, the top image shows the region under normal springtime conditions. Two tiny villages flank the river, the man-made surfaces regularly shaped and bright. The towns are connected by light-colored roads, which line the river on both sides and merge at a bridge where the river narrows on the right.

On May 14, 2008, two days after the initial earthquake, both the bridge and the roads it connected had disappeared under murky water. Some sections of the villages remained above the waterline, as did portions of the roads leading to the villages. The tops of trees, perhaps on slightly higher ground, formed tiny islands near the shores of the growing lake.

Formosat-2 took the final image on May 19, 2008. By this time, water levels in the earthquake lake had risen enough to immerse both villages and the entire road network. Tan debris floats on the surface of the water, concentrated over the locations of the villages.

Earthquake-created dams present a dual danger. Apart from the upstream floods that occur as a lake builds behind the natural dam, the piles of rubble that form the dam may be unstable. Another quake or simply the pressure of water behind it could burst the dam, sending a wall of water downstream. Downstream floods may also occur when water begins to cascade over the top of the dam. Thousands of people were evacuated from Beichuan on May 17 when one such lake threatened to burst, said China Daily.

Demise of a Quake Lake

Erosion is causing the slow disappearance of a lake that formed after the 2008 Sichuan earthquake.