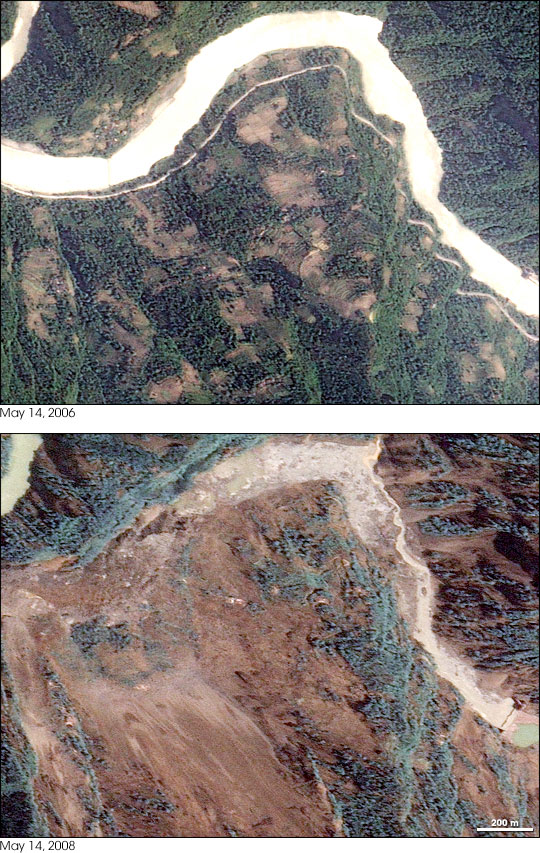 This pair of images, captured by Taiwan’s Formosat-2, illustrates the challenges faced by rescuers bringing equipment and supplies to survivors of the massive 7.9-magnitude earthquake that devastated the Sichuan Basin on May 12, 2008. The top image shows the tree-covered mountain terrain of China’s Beichuan County on May 14, 2006. A river curves along the base of the mountain, and a road follows the banks of the river.

On May 14, 2008, lower image, the landscape was almost unrecognizable. A landslide engulfed the entire mountainside, turning its green slopes brown. Both the road and the river are entirely gone, buried under the rubble, which rises in a mound up the opposite slope. Landslides and buckled roads have made travel within quake-affected regions difficult.

Like several such landslides throughout the Sichuan Basin, the landslide is also posing a flood hazard to survivors. The landslide has dammed the river, creating a lake virtually overnight. As of May 16, 21 such lakes had been reported in the Sichuan Basin, said China Daily. (See Lake formation in the aftermath of magnitude 7.9 earthquake.) Such lakes can cause floods both upstream of the slide, where the lake initially forms, and downstream, which will be flooded if the dam bursts.

In the wake of the May 12, 2008, earthquake in China, a series of landslides blocked the Jiangjiang River, creating swollen reservoirs that threatened to break through and flood catastrophically. The largest of these lakes, Tangjiashan Lake, threatened roughly 1.3 million people.