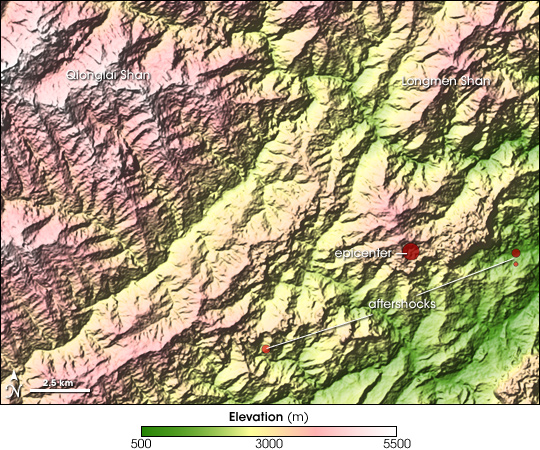 In south-central China’s Sichuan Province, the eastern edge of the Tibetan Plateau cascades steeply downward toward a deep, round basin. The ruggedness of the terrain and the heights of the mountains are testaments to the tremendous geologic forces shaping the land. On May 12, 2008, the population of Sichuan Province got a more tangible and tragic reminder: 10 kilometers beneath these mountains, the Earth’s crust cracked and slipped, generating a 7.9-magnitude earthquake that killed tens of thousands of people.

This topographic image of the Quionglai Shan and Longmen Shan (shan is Chinese for “mountains”) area northwest of the Sichuan Basin (the basin itself is out of view at the right edge of the scene) was made from data collected by the Advanced Spaceborne Thermal Emission and Reflection Radiometer (ASTER) on NASA’s Terra satellite on February 19, 2003. Lower elevations are green, while highest elevations are white. The image was created as if the Sun were in the northwest: northwest-facing slopes are bright, and southeast-facing slopes are shadowed. The epicenter of the quake as well as several of the aftershocks are overlaid on the image as red circles; the size of the circle indicates relative strength. A previous posting shows a wider area and more aftershocks.

The terrain slopes downhill from northwest to southeast. At upper left, the southern summits of the Qionglai Shan reach altitudes of over 5,500 meters (18,045 feet). The epicenter of the quake was in the southern part of the Longmen Shan, the range of mountains directly bounding the Sichuan Basin. In the week following the quake, hundreds of aftershocks extended in a rough line trending northeast away from the epicenter. Based on models and initial seismic data, scientists at the University of California, Santa Barbara, and the National Earthquake Information Center estimated that the some parts of the fault (below ground), may have slipped northeastward more than 900 centimeters (more than 29 feet). The rugged topography has been created over millions of years as a consequence of the northward “shove” of the Indian tectonic plate against the Eurasia plate.