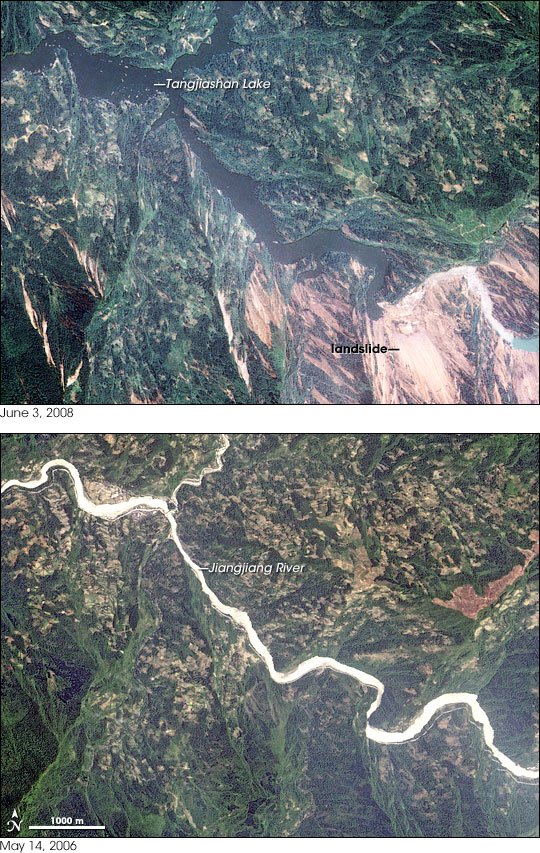 The unstable Tangjiashan Lake in China’s quake-hit Beichuan County was nearing what Chinese officials hoped would be its peak on June 6, 2008, reported the Chinese news agency, Xinhua. The lake formed when a series of landslides blocked the flow of the Jianjiang River during the massive earthquake that rattled the region on May 12, 2008, and the subsequent aftershocks. The lake that built behind the landslide dam held more than 220 million cubic meters of water as of June 6, said Xinhua.

This true-color image shows the lake on June 3, 2008. Compared to May 14, 2006, shown in the lower image, the Jianjiang River is almost unrecognizable. The water level has risen, taking the shape of the steep valley through which the river runs. The road that once ran alongside the river, the thin white line in the lower image, has been submerged. The landslide that dammed the river covers hundreds of meters along a bend in the river. Tan streaks in the surrounding mountains reveal additional landslide scars.

The lake poses a danger to regions downstream because the landslide may not be stable. Another earthquake or rising water levels could break the dam, releasing the reservoir of water that has built up behind it. If the landslide lake bursts, the subsequent floods could threaten up to 1.3 million people downstream, reported Xinhua. The lake itself, however, is remote and difficult to access except by foot or air. The few roads that are visible in the image are cut off by landslides.