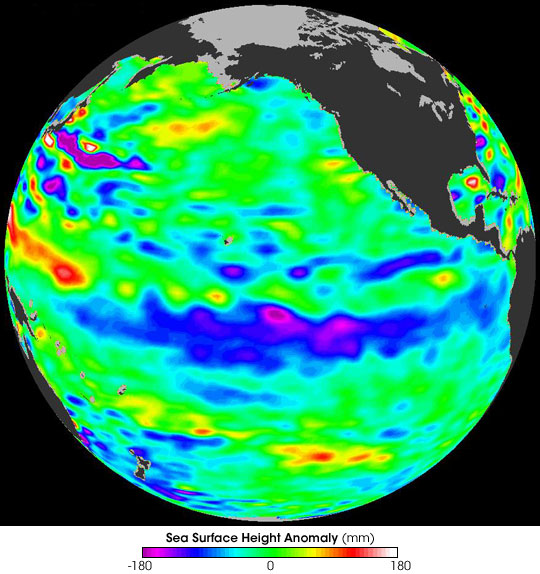 Continuing a pattern that had been building for nine months, cool conditions in the equatorial Pacific Ocean, known as La Niña, strengthened in the fall of 2007. Because warm water expands and cool water contracts, temperature affects the height of the sea surface. This image from NASA’s Jason satellite shows where sea surface height in the Pacific was higher or lower than the long-term average (1993–2005) during a 10-day period centered on October 16, 2007. Higher (warmer) areas appear in yellow and red, and lower (cooler) areas appear in purple and blue. The conspicuous blue band along the equator indicates a continuation of La Niña conditions that had been building since February 2007.

La Niña typically follows El Niño and exhibits the opposite atmospheric and oceanic conditions. La Niña is marked by stronger-than-normal easterly trade winds blowing across the equatorial Pacific. These winds move warmer surface waters toward the west, and in their wake, colder waters well up from the ocean’s depths. During La Niña events, the western Pacific becomes unusually warm, while the eastern Pacific becomes unusually cold. Rainfall is enhanced over the warmer, western Pacific and suppressed over the colder, eastern Pacific.

The impacts of La Niña aren’t just felt in the tropics. A strengthening La Niña also has implications for weather in the United States. In the fall of 2007, this was particularly true for the American Southwest, which had already experienced unusually dry conditions. “La Niña is the diva of drought,” explains Bill Patzert of NASA’s Jet Propulsion Laboratory. “It keeps the Pacific jet stream farther north, toward Oregon, Washington, and Canada, so the U.S. Southwest and Southeast get less moisture.” Southern California received just 8.1 centimeters (3.2 inches) of rain during the winter of 2006–2007, making it the region’s driest winter in 130 years. Patzert also cited eight consecutive years of dry conditions in the Colorado River watershed “This is the least amount of flow on the Colorado River in a century,” he said. A persistent La Niña was expected to prolong drought conditions.

The Jason satellite is a joint mission of the United States and France. NASA’s Jet Propulsion Laboratory (JPL) manages the U.S. portion of the mission. JPL is a division of the California Institute of Technology, in Pasadena, California.

El Nino May Be Morphing to La Nina