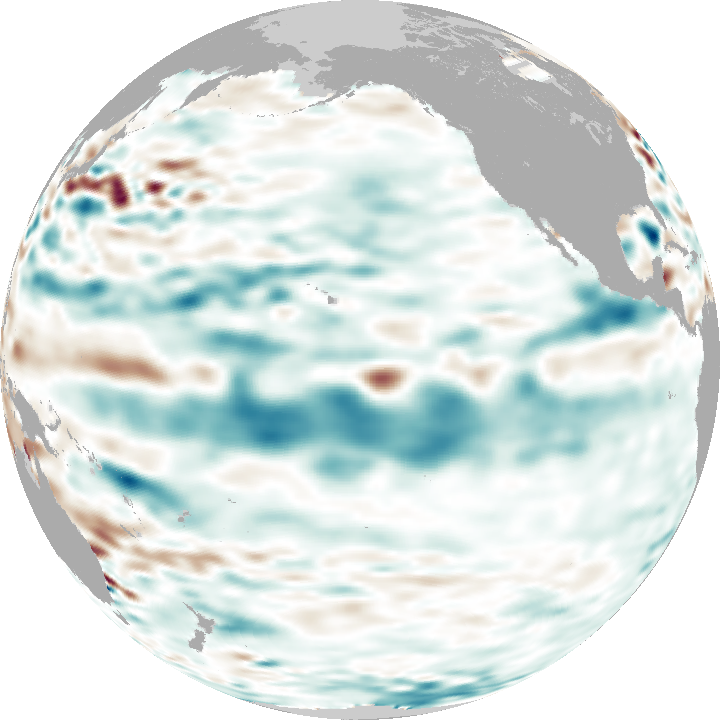 Continuing a trend that began earlier in the year, La Niña conditions strengthened through the summer of 2010, evidenced by a streak of cool water across the equatorial Pacific Ocean.

Acquired by the Ocean Surface Topography Mission/Jason-2 satellite, this map shows a 10-day average of sea-surface height centered on September 6, 2010. Areas where the water surface is higher than average are shades of red-brown, and areas where the water surface is lower than average are blue. Normal conditions appear in white. Sea surface height often, though not always, correlates with the temperature of the water; warmer waters tend to have higher surface heights due to thermal expansion.

The El Niño develops as easterly trade winds weaken over the eastern Pacific Ocean. Those winds usually keep eastern Pacific waters cool, as they push warm surface waters toward the western Pacific and pull up cooler water from the depths. The weakening of the trade winds enables warm waters to gradually spread eastward, heating up the central Pacific.

La Niña typically follows El Niño, and causes essentially the opposite conditions. As the easterly trade winds strengthen, La Niña spreads cool water from the South American coast to the central Pacific. This see-saw pattern of El Niño and La Niña can drive large-scale weather changes, especially in the tropics.

This map reveals a broad swath of cool water stretching from South America to New Guinea. The ocean is not, however, uniformly cool. Pockets of warm water are mixed with the cool, particularly in the western Pacific. Warmer waters in this region can lead to increased rainfall, and La Niña conditions may have played a role in the devastating floods in Pakistan during the Northern Hemisphere summer of 2010.

Over the eastern Pacific Ocean, cooler waters lead to less moisture along the coasts of North and South America. So as more rain pounds some parts of the globe, La Niña conditions can deepen drought in others. By the time La Niña conditions intensified in September 2010, the southwestern United States had experienced more than 10 years of mostly dry conditions. A release from NASA’s Jet Propulsion Laboratory reported that the American Southwest might experience not only drier conditions, but also intensified wildfires under strong La Niña conditions.