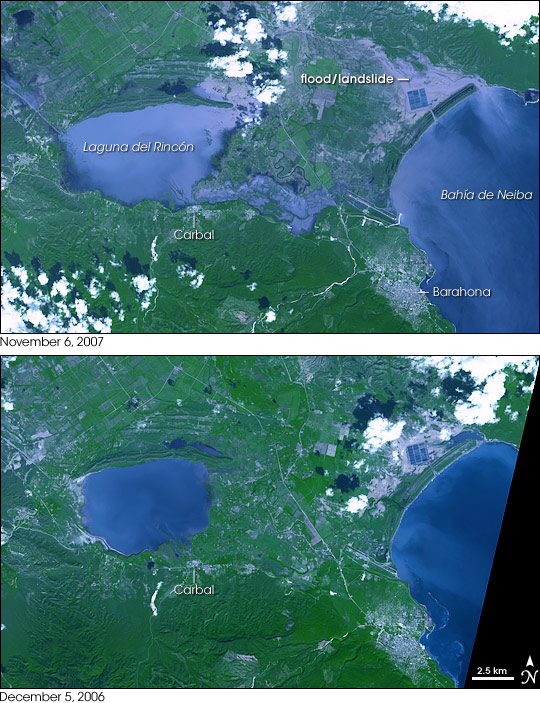 Tropical Storm Noel pounded the Dominican Republic with heavy rain as it passed over the island on October 28 and October 29, 2007. The rainfall flooded low-lying areas, such as the area shown in this pair of images. The top image was captured by the Advanced Spaceborne Thermal Emission and Reflection Radiometer (ASTER) flying onboard NASA’s Terra satellite on November 6, 2007. A comparison of this image with one ASTER took a year earlier reveals how damaging Tropical Storm Noel was to the region.

The images show the city of Barahona and its surroundings in the southwestern Dominican Republic. The most obvious difference between the two images is the flooding around the Laguna del Rincón. The southern shore of the lake had expanded to the edge of the town of Carbal, the silver area on the southeast side of the lake. Settled areas on the western shore of the lake, also silver in the 2006 image, appear to be inundated in November 2007, and water sits over a road leading to the lake from the northwest. Floodwater appears to have made a new bay on the northeast side of the lake.

On the east, water from the swollen lake drains into the Bahía de Neiba. The straight edges of the temporary river suggest that it flows over farmland or that man-made dikes are channeling the water. Before draining into the bay, the flood cuts across an airport north of the city of Barahona, easily identifiable in this image by the long runway that runs diagonally to the bay.

Additional signs of flooding can be seen near the northern shore of the Bahía de Neiba. Here the land has a slightly wrinkled appearance suggestive of mountains or hills. In the top image, much of the area is light purple, slightly paler than the water. This is either flood water choked with mud, a slick of mud left behind after the flood receded, or a landslide. A square of dark blue stands out in the flood/landslide region. This is likely a shrimp farm that had been surrounded by walls high enough to keep the floods out. The flooded area extends north, covering some of the fields that make up the grid of farmland along the top of the image.

As of November 6, 85 people had been reported dead in floods throughout the Dominican Republic with an additional 48 missing, said the United Nations Office for the Coordination of Humanitarian Affairs (OCHA). The floods damaged more than 350,000 cultivated areas and damaged or destroyed 16,652 houses. In the province shown in this image, seventy percent of coffee production was affected by the flooding, said OCHA.

You can download a 15-meter-resolution KMZ file of the flooding suitable for use with Google Earth.

The images show the city of Barahona and its surroundings in the southwestern Dominican Republic. The most obvious difference between the two images is the flooding around the Laguna del Rincón.

Tropical Storm Noel left floods and landslides in its wake after crossing Hispaniola, the island shared by the Dominican Republic and Haiti, on October 28, 2007.