El Nino May Be Morphing to La Nina 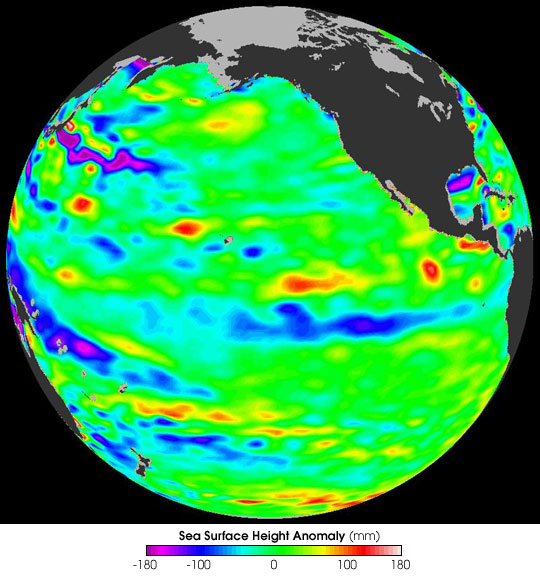 New data of sea level height from early February 2007 show that the tropical Pacific Ocean has transitioned from a warm (El Niño) to a cool (La Niña) condition during the prior two months. Water expands slightly as it warms, so increases or decreases in sea level height observed by the altimeter on the Jason satellite reveal places where temperatures are warmer or cooler than average.

The beginnings of a possible La Niña are indicated by the blue area (in the center of the image along the equator) of lower-than-normal sea level (cold water). The image is based on the average of 10 days of data centered on February 12, 2007, compared to the long-term average of observations from 1993 through 2005. In this image, places where the Pacific sea surface height is higher (warmer) than normal are yellow and red, and places where the sea surface is lower (cooler) than normal are blue and purple. Green shows where conditions are near normal.

In September 2006, Jason observed a mild El Niño occurring in the Pacific. A La Niña situation often follows an El Niño episode and is essentially its opposite. During a La Niña, the easterly trade winds that blow persistently near the equator are stronger than normal. The strong trade winds push warm surface waters westward across the Pacific. The colder, deeper waters that well up to the surface in their place extend far out into the central equatorial Pacific.

A La Niña situation changes global weather patterns and is associated with less moisture in the air, resulting in less rain along the coasts of North and South America. “La Niña could send an already parched western United States to its knees,” said Dr. Bill Patzert, an oceanographer at NASA’s Jet Propulsion Laboratory. “In the Southwest, we call La Niña the little lady with the big dry punch.” It is not certain yet if this current cooling trend will eventually evolve into a long-lasting, well-developed La Niña. Jason will continue to track this developing switch in the climate.

The Jason satellite is a joint mission of the United States and France. NASA’s Jet Propulsion Laboratory (JPL) manages the U.S. portion of the mission. JPL is a division of the California Institute of Technology, in Pasadena, California.