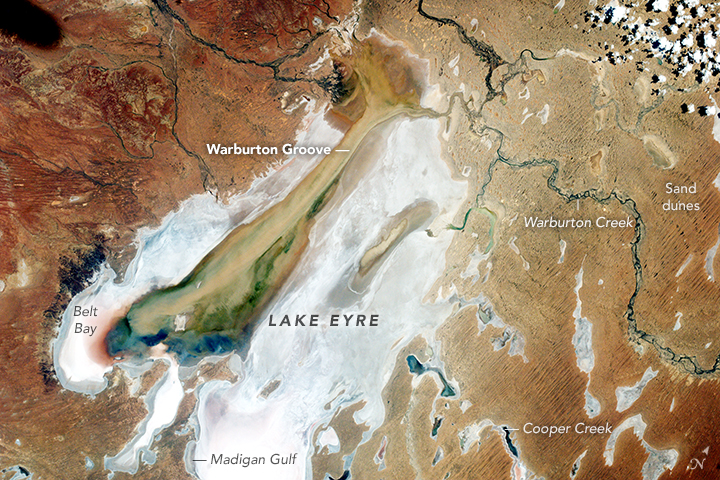 Taken by the EarthKAM camera on the International Space Station, this photograph shows Australia’s largest inland lake. Lake Eyre is easily recognizable from space, being a large, white-floored lake bed that is usually dry. However, a remarkable, periodic change was visible in February 2017.

Tan, green, and blue splotches stretching across the lake bed are the result of flood waters channeled down Warburton Groove. The Warburton Creek enters Lake Eyre at its northern end, and is seen here flooding into the dry lake. The event gave rise to a variety of colors indicating new vegetation, algae-tinted water, and muds transported by the flood water. A smaller discolored zone appears where the southern arm of the Warburton delta has also spilled water onto the lake floor (image center).

In this desert region, flood waters rarely reach the lake, instead evaporating along the way or getting absorbed by dune sand. But after heavy rains fell in late 2016, floods in rivers like the Warburton and Cooper have managed to reach Lake Eyre after a delay of months as the water slowly rolled across the vast watershed. As of February 20, 2017, water was reported to be flowing down the entire length of the lake (130 kilometers, or 80 miles), and reaching one of the lowest points (15 meters or 50 feet below sea level) at Belt Bay, where the water depth was measured at 1.3 meters (4 feet).

The lake is now formally known as Kati Thanda–Lake Eyre. Australia is one of many countries that have adopted a dual-naming policy for some natural features and cities.

Click here for a view of lake as it appeared from the space shuttle in December 1990.

EarthKAM photograph CCFID_126465_2017038014745 was acquired on February 14, 2017, with a Nikon D2Xs digital camera using a 50 mm lens, and is provided by Sally Ride EarthKAM@Space Camp on the International Space Station. The caption is provided by the Earth Science and Remote Sensing Unit, NASA Johnson Space Center. EarthKAM (Earth Knowledge Acquired by Middle school students) is a NASA educational outreach program that enables students, teachers, and the public to learn about Earth from the unique perspective of space. During Sally Ride EarthKAM missions, middle school students around the world request images of specific locations on Earth. The image in this article has been enhanced to improve contrast. Caption by M. Justin Wilkinson, Texas State University, Jacobs Contract at NASA-JSC.