While a high-pressure weather system brought warmer than normal temperatures to Greenland and northern Canada in March 2013, much of North America, Europe, and Asia shivered through weeks of unseasonably cool temperatures. The contrasting temperatures are no coincidence: the same unusual pressure pattern in the upper atmosphere caused both events.

Atmospheric pressure patterns are constantly in flux, as air masses of differing temperatures and densities move around the skies. One key measure of pressure that meteorologists track closely is known as the Arctic Oscillation (AO) index, the difference in relative pressure between the Arctic and the mid-latitudes. Changes in the AO have can major impacts on weather patterns around the world.

In late March, the AO dropped as low as -5.6. (See this chart published by the Washington Post’s Capital Weather Gang to see how this compares with other periods when AO values reached record-low levels). 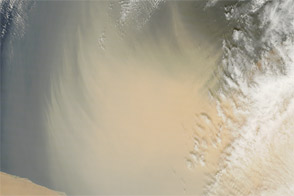