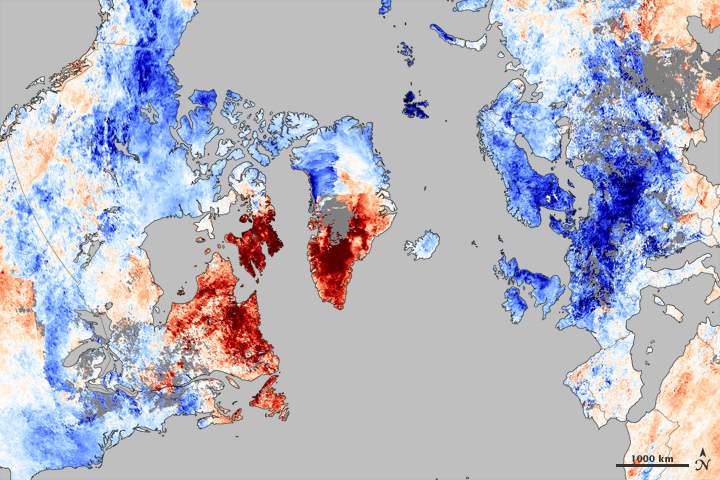 The first week of December was a chilly one for much of Europe and parts of the United States. This image shows the temperature of the land surface for December 3-10, 2010, compared to the average temperature for the same period between 2002 and 2009. The measurements are from the Moderate Resolution Imaging Spectroradiometer (MODIS) on NASA’s Aqua satellite.

Early December 2010 was much cooler than average in northern Europe and the eastern United States. Greenland and parts of northern Canada, however, were exceptionally warm. This temperature pattern was caused by the Arctic Oscillation.

The Arctic Oscillation is a climate pattern that influences weather in the northern hemisphere. It describes the relationship between high air pressure in the mid-latitudes and low pressure over the Arctic. When the pressure systems are weak, the difference between them is small, and air from the Arctic flows south, while warmer air seeps north. This is referred to as a negative Arctic Oscillation.

Like December 2009, the Arctic Oscillation was negative in early December 2010. Cold air from the Arctic was channeled south around a blocking weather system over Greenland, while Greenland and northern Canada heated up.

The unusual cold brought heavy snow to Northern Europe, stopping flights and trains early in December. Cold temperatures and snow also closed roads and schools in the eastern United States and Canada during the first week of December. The diagonal path of a powerful winter storm is visible as a streak of cold across the Upper Midwest of the United States.