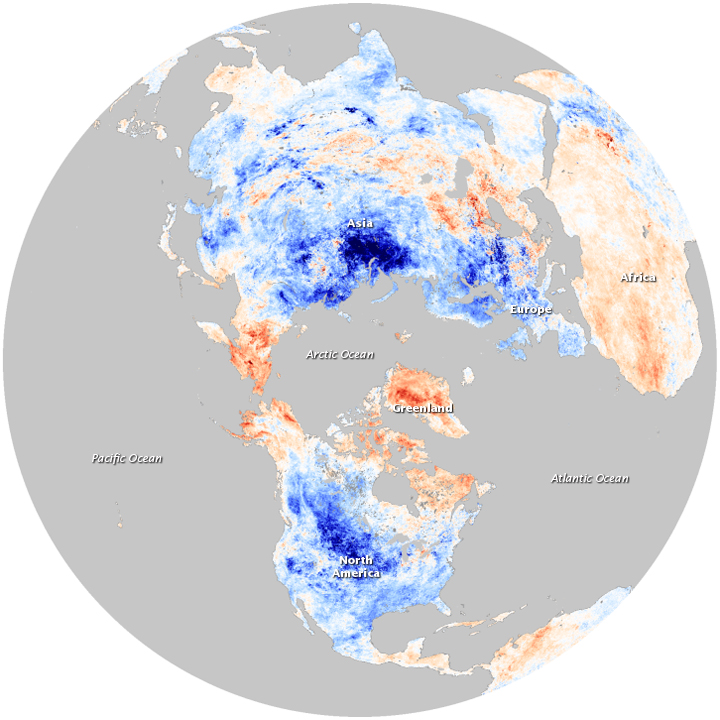 If you live nearly anywhere in North America, Europe, or Asia, it’s no news that December 2009 and early January 2010 were cold. This image illustrates how cold December was compared to the average of temperatures recorded in December between 2000 and 2008. Blue points to colder than average land surface temperatures, while red indicates warmer temperatures. Much of the Northern Hemisphere experienced cold land surface temperatures, but the Arctic was exceptionally warm. This weather pattern is a tale-tell sign of the Arctic Oscillation.

Throughout December 2009, the North Atlantic Oscillation was strongly negative, said the National Weather Service. This image shows the impact of the negative Arctic Oscillation on land surface temperatures throughout the Northern Hemisphere as observed by the Moderate Resolution Imaging Spectroradiometer (MODIS) on NASA’s Terra satellite. Cold Arctic air chilled the land surface at midlatitudes, while Arctic land, such as Greenland and Alaska, was much warmer than usual.