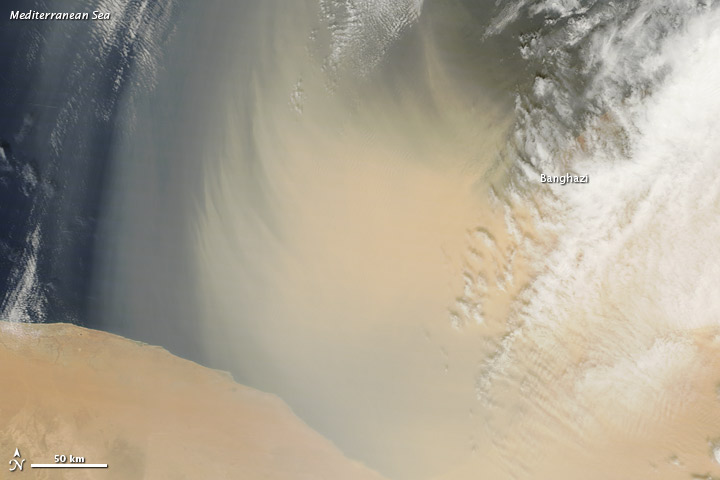 A dust storm blew out of Libya and across the Mediterranean Sea in late March 2013. Southwest of the coastal city of Banghazi (Benghazi), an especially thick dust plume spanned roughly 100 kilometers (60 miles), and the plume was thick enough to completely hide the ocean surface below.

The Moderate Resolution Imaging Spectroradiometer (MODIS) on NASA’s Terra satellite acquired this natural-color image of the dust storm on March 30, 2013. The dust plumes arose hundreds of kilometers inland, and dust stretched across the Mediterranean Sea toward southern Italy. (The extent of the dust storm can be seen in the high-resolution image.)

Dust storms count among the most frequent natural hazards in Libya. A relatively mild Mediterranean climate predominates along the coast, but vast sand seas sprawl over the interior landscape. Those sand seas provide plentiful material for dust storms, and hot, dry, dusty winds can last up to four days in the spring and fall. In this country where water is so scarce, development projects pull water from aquifers to be used for irrigation. 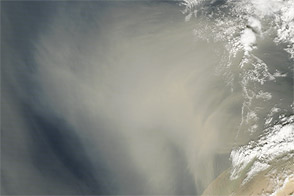 Acquired March 7, 2013, this image shows a dust storm off Libya. 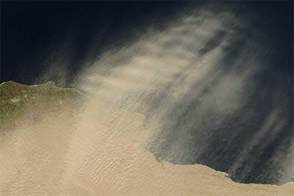 Acquired May 13, 2010, this natural-color image shows a thick plume of dust blowing off the Libyan coast, past the island of Kriti, and toward the island of Peloponnisos.

This true-color image shows a dust plume blowing off the Libyan coast and over the ocean on April 28, 2009.