Impact of Polluted Skies on Clouds and Climate 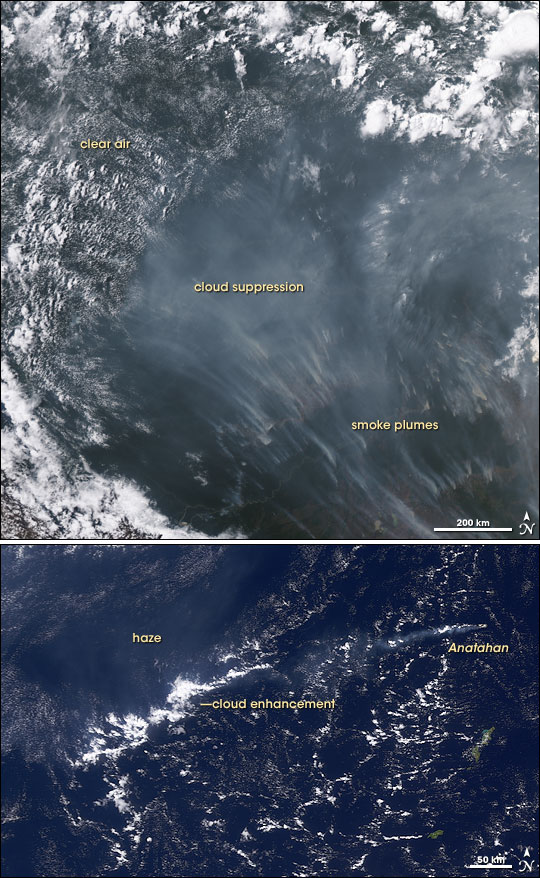 This pair of images illustrates how the amount of sunlight that aerosols absorb affects cloud formation. The top image shows clouds and smoke from forest fires in the western Amazon Rainforest on September 17, 2005. Clouds were present in the clear (not smoky) air to the west and north, but the smoke choked off cloud formation across much of the center of the image. Smoke contains dark-colored soot particles that absorb a lot of sunlight. In the bottom image, a plume of aerosols emitted by the eruption of the Anatahan Volcano in the Pacific Ocean on April 5, 2006, has enhanced cloud formation in the middle of the image. Volcanic eruptions contain lots of sulfur dioxide gas, which chemical reactions turn into particles known as sulfates. Sulfates are reflective, absorbing less sunlight. These images were collected by the Moderate Resolution Imaging Spectroradiometer (MODIS) sensors on NASA’s Terra (top image) and Aqua (bottom) satellites.

Scientists have known for years that aerosols can increase cloudiness by acting as “seeds” on which cloud droplets can form. This ability of pollution particles to generate clouds is responsible for the interesting images of ship tracks often observed by satellites. One explanation for how dark-colored, sunlight-absorbing aerosols inhibit cloud formation is that in heating up the air column, they create a layer of warm, stable air. A layer of warm, stable air may interfere with the rising and cooling of air that typically causes clouds to form. The scientists estimate that, worldwide, aerosol pollution could increase cloud cover by as much as 5 percent. In polluted areas, these cloud changes can change the availability of fresh water and regional temperatures.

This research was published on July 13, 2006, in the online version of Science magazine. The late Yoram Kaufman of NASA’s Goddard Space Flight Center, and Ilan Koren of the Weizmann Institute in Rehovot, Israel, conducted the study.

NASA images by Robert Simmon and Jesse Allen, based on data provided by the MODIS team.

Studying Smoke Above the Clouds

A growing body of research indicates that smoke above clouds can have important consequences for the climate.