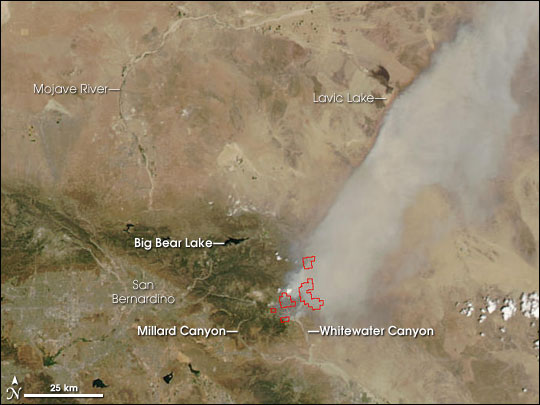 Two wildfires burning in the Mojave Desert at the foothills of the San Bernardino Mountains in southern California continued to spread and threatened to merge into a single large blaze in mid-July 2006. At just over 8,000 acres as of July 14, the Millard Complex Fire is the smaller of the two, and it is located farther west. To the east is the larger Sawtooth Complex Fire, which was about 48,000 acres. The Moderate Resolution Imaging Spectroradiometer (MODIS) on NASA’s Aqua satellite captured this image of the area on July 13, 2006, at 2:10 p.m. local time. Locations where MODIS detected actively burning fire are outlined in red.

The Sawtooth Fire is burning mostly in chaparral, an ecosystem dominated by dense thickets of low-growing, drought-adapted shrub. Part of the fire has invaded the San Bernardino National Forest. The Millard Fire is burning in chaparral and conifer forest. Both fires are threatening homes in the region. As of July 14, the National Interagency Fire Center estimated the Sawtooth Fire was 20 percent contained; the Millard Fire was about 5 percent contained.

The high-resolution image provided above has a spatial resolution (level of detail) of 250 meters per image pixel. That image also shows a wider area, providing a view of the Canyon Fire, which is burning in the Diablo Mountains to the east of San Jose. The MODIS Rapid Response Team provides twice-daily images of this area in a variety of resolutions.

Several large fires were burning in California in mid-July 2006. This event contains images of the Sawtooth, Millard, and Canyon Fires.