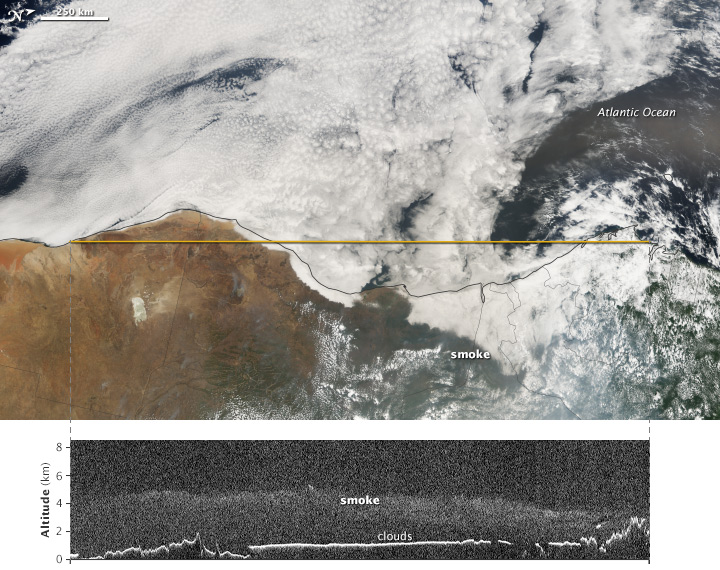 If you look at satellite imagery of Earth on a browser like Worldview or NOAAView, a few important features of the atmosphere become obvious. First, clouds dominate the view. They cover about 60 percent of the planet at all times, and the percentage is even higher over oceans, where banks of low-lying stratocumulus clouds often form. Second, plumes of smoke, dust, and industrial haze—which are made up of airborne particles called aerosols—often darken portions of the atmosphere.

What happens when these two atmospheric heavyweights—clouds and aerosols—meet? Scientists at NASA are working to understand this. “One of the key uncertainties remaining in climate science relates to how clouds and aerosols interact,” explained Hiren Jethva, a scientist at Goddard Space Flight Center. “And one of the reasons for that relates to what happens when aerosols end up above the cloud layer.”

Aerosols can rise or get blown above clouds. They often do just that between July and September in Central Africa, where agricultural fires produce plumes of smoke that blow offshore and drift over low-lying clouds in the southeastern Atlantic. Similar aerosol-over-cloud situations occur in other parts of the world. Saharan dust blows over clouds in the Atlantic, and smoke from southeast Asia hovers over clouds in the Pacific. “Aerosols elevated above clouds can travel faster and longer than those near the surface, implying far-reaching impacts,” explained Hongbin Yu, an atmospheric scientist at Goddard.

The images above come from the Cloud-Aerosol Lidar with Orthogonal Polarization (CALIOP) instrument on the CALIPSO satellite and the Moderate Resolution Imaging Spectroradiometer (MODIS) on NASA’s Aqua satellite. They show a smoke plume elevated above a cloud layer in the southeastern Atlantic on September 10, 2014. The smoke came from agricultural fires in central Africa, which were widespread in that region in September. The background (top) image was captured by MODIS and provides a true-color view of the smoke and clouds from above. The yellow line indicates the path of the CALIPSO satellite and its laser, which sent pulses of light (lidar) down through the atmosphere and recorded the reflections in a vertical profile (lower image). The MODIS image has been rotated (north is to the right) so that the line that depicts the CALIPSO flight track is aligned horizontally.

Whether smoke or dust hovers above clouds or in a cloud-free environment can lead to very different impacts on the atmosphere and climate. “To put it simply, smoke or dust in cloud-free conditions generally causes a cooling of the Earth-atmosphere system,” said Yu, “whereas the same types of particles may have a warming effect if they are located above clouds.”

Why the difference? Smoke and dust plumes contain large number of “absorbing aerosols”—particles that both scatter and absorb the energy in sunlight. In cloud-free conditions, the scattering effect dominates, and the particles reflect more solar radiation back to space than underlying dark surfaces such as the ocean or a forest. This produces a cooling effect.

“But clouds are generally much brighter than Earth’s surfaces, meaning they reflect more sunlight back toward space. Absorbing aerosols above clouds intercept some of this cloud-reflected light, warming the atmosphere in the process,” Yu said. “The brighter the underlying cloud layer, the stronger the warming effect of the aerosols.”

Though several studies have demonstrated the warming effect of aerosols above clouds, few climate models currently incorporate it, and many key details remain fuzzy. For instance, how does the size, shape, or reflectivity of smoke or dust particles affect the warming? And how do other factors—like humidity—influence the climate effects?

Sensors on the ground are not much help because they cannot detect aerosols above clouds. “Satellite and airborne observations—particularly the 4Star sensor—are really the key to understanding this problem,” said Jethva. “There are still many unanswered questions. We are starting to get answers by comparing and contrasting observations from different satellite and airborne sensors, but we really need more launches and more field campaigns to push the science forward.”

Studying Smoke Above the Clouds

A growing body of research indicates that smoke above clouds can have important consequences for the climate.

Impact of Polluted Skies on Clouds and Climate