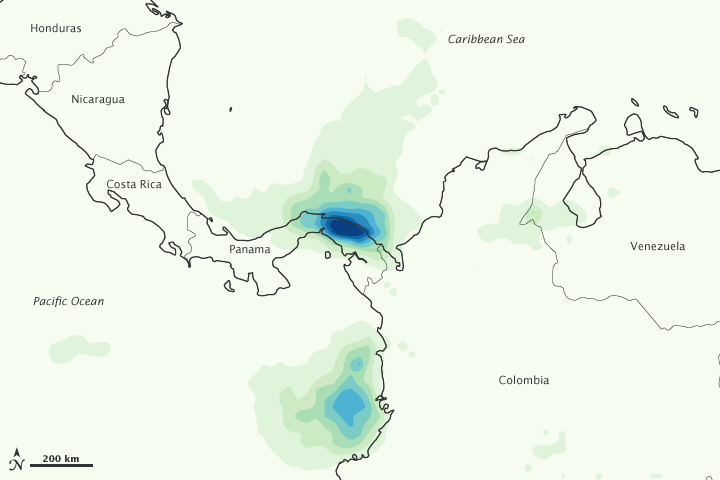 The Panama Canal closed for 17 hours in early December 2010, only the third time in its 96-year history. Authorities closed the canal after heavy rains raised two artificial lakes associated with it, Alajuela and Gatun, to unprecedented levels. The heavy rains occurred in a persistent low-pressure area along the Intertropical Convergence Zone where winds from the Northern and Southern Hemispheres meet and fuel strong storms. The canal-closing rains in Panama continued a pattern of heavy rain in Central and South America from the previous month.

This color-coded image shows rainfall amounts from December 6 to December 12, 2010. The heaviest rainfall—more than 600 millimeters or nearly 24 inches—appears in dark blue. The lightest amounts—less than 75 millimeters or 3 inches—appear in light green. The heaviest rainfall occurs along the coast of northeastern Panama. Another pocket of heavy rain occurs along Colombia’s Pacific coast.

Although the canal reopened on December 9, 2010, rain continued falling. On December 13, the Associated Press reported that 2,500 homes had been damaged and 10 people had been killed because of the heavy rains.

Previous closures of the Panama Canal occurred in 1989 when the United Sates invaded Panama to oust Manuel Noriega, and in 1915–1916 in the wake of local landslides.

This image is based on data from the Multisatellite Precipitation Analysis produced at NASA’s Goddard Space Flight Center, which estimates rainfall by combining measurements from many satellites and calibrating them using rainfall measurements from the Tropical Rainfall Measuring Mission (TRMM) satellite.

This color-coded image shows rainfall amounts in andaround Panama from December 6 to December 12, 2010.

This color-coded map shows rainfall amounts over Central and South America from November 25 to December 1, 2010.

Tropical Storm Nicole maintained tropical-storm status for only a matter of hours, but the storm nevertheless poured torrential rains on the island nation of Jamaica. The heavy rain led to flash floods and landslides, which proved especially deadly in shantytowns along unstable banks.

Flooding and Landslides from Heavy Rain in Japan