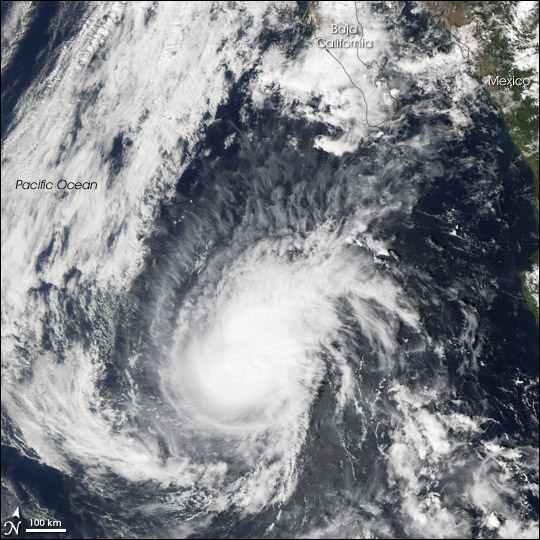 Hurricane Paul formed on October 21, 2006, in the eastern Pacific near the coast of Mexico. It grew quickly to hurricane strength as it spun off the coast near Baja California for the next several days. The sixteenth named storm of the Pacific storm season, Paul remained offshore as of October 24, though residents of southern Baja California were eyeing it warily for signs it might shift and come ashore there.

This photo-like image was acquired by the Moderate Resolution Imaging Spectroradiometer (MODIS) on the Aqua satellite on October 23, 2006, at 12:30 p.m. local time (20:30 UTC). Paul at the time of this image was a small, well-defined swirl. However, cloud patterns over a wide area appear to be under the storm’s influence, with clouds reaching as far as southern Baja. Winds around the center of Hurricane Paul were whipping around at 160 kilometers per hour (100 miles per hour), according to the University of Hawaii’s Tropical Storm Information Center.

In 2005, the record-breaking Atlantic hurricane season was the focus of attention, with the number of named storms exhausting the letters of the alphabet. But as of late October 2006, the hurricane activity in the eastern Pacific Ocean was outpacing the Atlantic: 16 named storms (9 of them hurricanes) versus 9 named storms (5 of them hurricanes). On average, the eastern Pacific Ocean experiences more tropical storms and hurricanes than the Atlantic Basin, 16.4 compared to 10.1. Powerful hurricanes in the eastern Pacific rarely make landfall in the western United States. Persistent easterly winds not only tend to steer storms away from the coast, but they also “shove” the ocean’s surface water westward, away from the coast, allowing cool water to well up to replace it. The cool water weakens any storms that do approach the coast.

As October drew to a close, Hurricane Paul was approaching the southern tip of Mexico's Baja Peninsula.