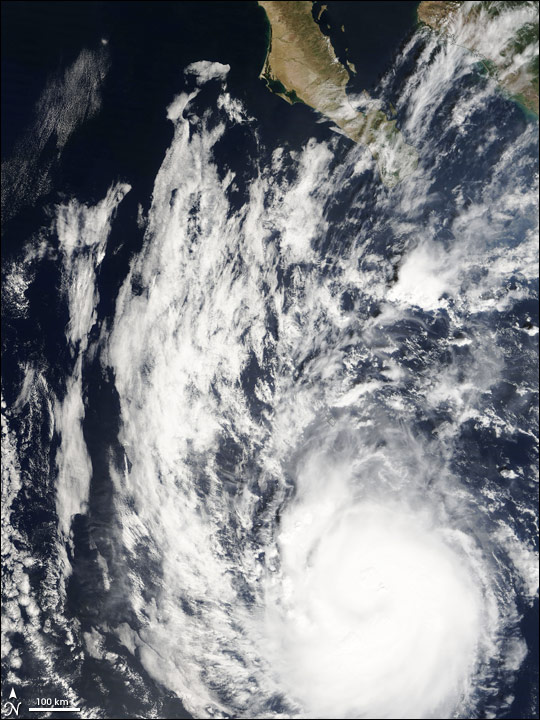 As October drew to a close, Hurricane Paul was approaching the southern tip of Mexico’s Baja Peninsula. The sixteenth named Pacific storm of the 2006 season, Paul was whipping up sustained winds of 165 kilometers per hour (105 miles per hour) at the time of the National Hurricane Center’s 11:00 a.m. Pacific Daylight Time briefing on October 23. The storm track and intensity forecasts for Paul were still uncertain at that time, but landfall along the southern tip of Baja Peninsula as a strong storm was still a possibility.

In this image from the Moderate Resolution Imaging Spectroradiometer (MODIS) on NASA’s Terra satellite on October 22, 2006, the eye of Hurricane Paul was several hundreds kilometers southwest of Baja. A bright disk of clouds spirals counter-clockwise into a cloudy eye at the heart of the storm. In places, this smooth-seeming cloud deck is rippled by puffy cloud tops—a sign of thunderstorms lofting heat and moisture high into the atmosphere. The southern tip of Baja Peninsula appears along the top edge of the image.

In 2005, the record-breaking Atlantic hurricane season was the focus of attention, with the number of named storms exhausting the letters of the alphabet. But as of late October 2006, the hurricane activity in the eastern Pacific Ocean was outpacing the Atlantic: 16 named storms (9 of them hurricanes) versus 9 named storms (5 of them hurricanes). On average, the eastern Pacific Ocean experiences more tropical storms and hurricanes than the Atlantic Basin, 16.4 compared to 10.1. Powerful hurricanes in the eastern Pacific rarely make landfall in the western United States. Persistent easterly winds not only tend to steer storms away from the coast, but they also “shove” the ocean’s surface water westward, away from the coast, allowing cool water to well up to replace it. The cool water weakens any storms that do approach the coast.

As October drew to a close, Hurricane Paul was approaching the southern tip of Mexico's Baja Peninsula.