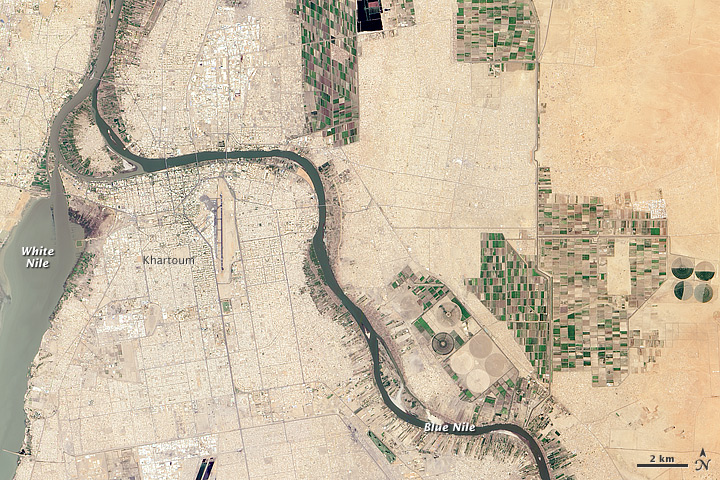 Though it moves just a tiny fraction of the water carried by the Amazon, Congo, or Niger rivers, the Nile is the world’s longest river. Its main tributaries—the White Nile and the Blue Nile—meet in Khartoum, Sudan, a rain-poor city of nearly 2 million residents that relies on the Nile for irrigation. Well-watered crops line the river banks, and patchworks of croplands (including center-pivot irrigated fields) dot the city’s outskirts.

The Advanced Land Imager (ALI) on NASA’s Earth Observing-1 (EO-1) satellite acquired this natural-color image on April 26, 2013, near the end of the region’s dry season. Compared to the White Nile, the Blue Nile is skinny and its highly variable flow is near its lowest point at this time of year. Harsh dry seasons and droughts can periodically dry out the Blue Nile completely.

The White Nile and Blue Nile derive their colors from the sediments they carry. Originating in the Equatorial Lakes region, the White Nile is rich in light gray sediments. As this long river meanders over flat terrain, it loses over half of its water to evaporation.

Upstream from both rivers, residents rely largely on precipitation for farming. Most of the water extraction along the Nile occurs in Sudan and Egypt, where rainfall is too sparse to support crops. More than 120 millio people rely upon Nile waters for irrigation and other uses. 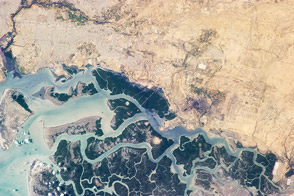 Floods Along the White Nile

Seasonal rains along the White Nile and Blue Nile can cause widespread devastation when the rivers overflow.