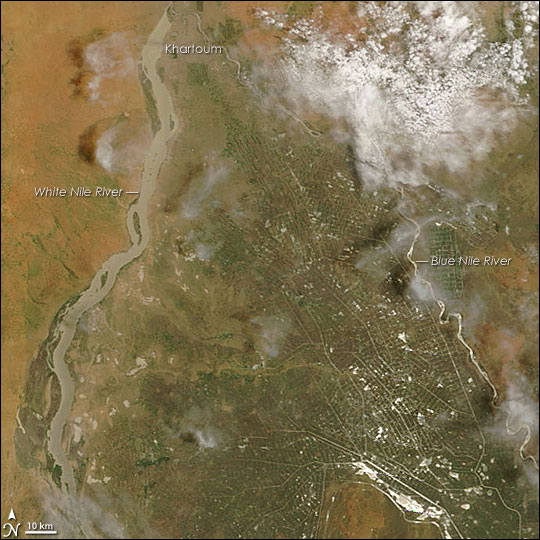 Though flooding occurs every year in the African country of Sudan, 2007 brought unusually extreme floods that affected at least 400,000 people as of August 29, reported the United Nations. Apart from destroying buildings, crops, and land, the swollen rivers and pools of standing water increase the risk of water-borne disease such as cholera, acute watery diarrhea, and malaria, said the United Nations. This photo-like image, captured by the Moderate Resolution Imaging Spectroradiometer (MODIS) on NASA’s Terra satellite on August 29, 2007, shows flooding around the capital city of Khartoum, the tan-gray area nestled between the converging Blue and White Nile Rivers.

To the south, sunlight reflecting off the surface of the water has turned the Blue Nile River silvery white, making it stand out from the surrounding land. Brilliant flecks of silver in the landscape between the two rivers are created by light reflecting off standing water or some other bright surface. The sunlight also highlights the intricate network of canals that run like arteries through squares of green agriculture. In the west, the White Nile River paints a wide, white-brown ribbon down the landscape. The river is several times wider than it is during the dry season, as a comparison with a cloud-free image from June 2007 reveals. (The area shown here is in the lower-left corner of the image.)

Another sign of flooding in the image is the addition of green to the land. Even beyond the irrigated land between the two rivers, the arid orange landscape is brushed with green where seasonal rivers have nourished new plants.

Intense rains swept across Sudan starting on July 8, 2007, causing floods across much of the North African country throughout July, August, and September.

A Pair of Niles and Deltas

Two inland deltas spring from the landscape near the confluence of the Blue and White Niles.