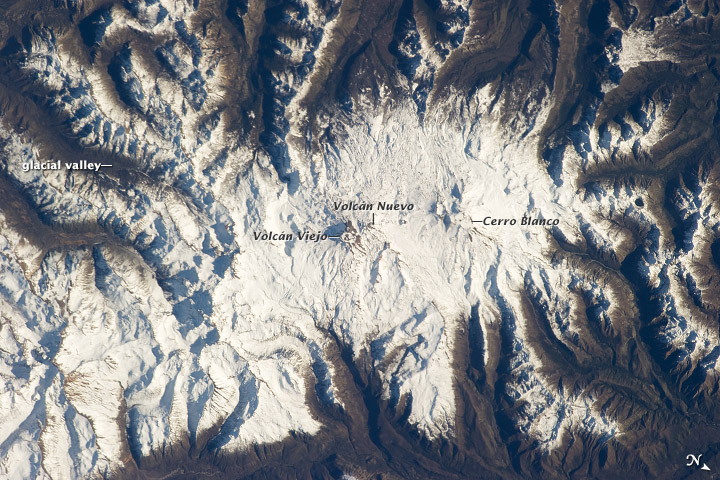 This photograph by an astronaut on the International Space Station highlights the Nevados de Chillán, a large volcanic area near the Chile-Argentina border. In this image, north is to the lower right.

Like other historically active volcanoes in the central Andes, the Nevados de Chillán were created by upwelling magma generated by eastward subduction, as the dense oceanic crust of the Pacific basin dove beneath the less dense continental crust of South America. The rising magmas associated with this type of tectonic environment frequently erupt explosively, forming widespread ash and ignimbrite layers. They can also produce less explosive eruptions, with voluminous lava flows that layer together with explosively erupted deposits to build the classic cone-shaped edifice of a stratovolcano.

The Nevados de Chillán includes three distinct volcanic structures built within three overlapping calderas. The snow-capped volcanic complex sits within the glaciated terrain of the central Andes. Glacial valleys are visible at image upper left, upper right, and lower right. The northwestern end of the chain is occupied by the 3,212 meter (10,538 foot) high Cerro Blanco, also known as Volcán Nevado. The 3,089 meter (10,134 foot) high Volcán Viejo (also known as Volcán Chillan) sits at the southeastern end; this volcano was active during the 17th to 19th centuries. A group of lava domes known as Volcán Nuevo formed to the northwest of Volcán Viejo between 1906 and 1945, followed by an even younger dome complex, Volcán Arrau, that formed between 1973 and 1986 (Volcán Arrau is not shown in the image).

Astronaut photograph ISS036-E-7165 was acquired on June 11, 2013, with a Nikon D3S digital camera using a 400 millimeter lens, and is provided by the ISS Crew Earth Observations experiment and Image Science & Analysis Laboratory, Johnson Space Center. The image was taken by the Expedition 36 crew. It has been cropped and enhanced to improve contrast, and lens artifacts have been removed. The International Space Station Program supports the laboratory as part of the ISS National Lab to help astronauts take pictures of Earth that will be of the greatest value to scientists and the public, and to make those images freely available on the Internet. Additional images taken by astronauts and cosmonauts can be viewed at the NASA/JSC Gateway to Astronaut Photography of Earth. Caption by William L. Stefanov, Jacobs/JETS at NASA-JSC.

This photograph by an astronaut on the International Space Station highlights the Nevados de Chillán, a large volcanic area near the Chile-Argentina border.

Part of the back-arc volcanism of the Andes, this complex landscape formed over 300,000 years.

The largest and most active of several volcanic centers on New Zealand’s North Island is also the island’s highest mountain.

The landscape in the central Andes Mountains, near the border between Chile and Argentina, is dominated by volcanoes and associated landforms.

East of the Andes, the volcanic field is a product of complex geological processes.