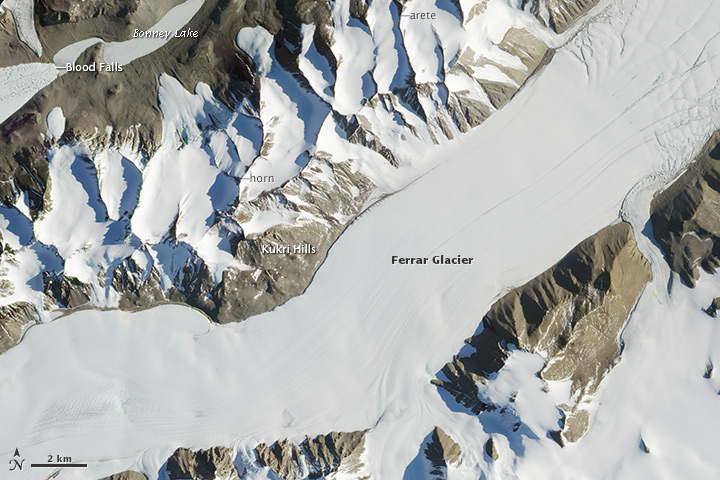 Ferrar Glacier begins in Victoria Land at Taylor Dome, a part of the larger East Antarctic Ice Sheet. Snow accumulates at Taylor Dome, compresses into ice with time, and flows downward toward the Ross Sea.

Some of this ice flows into Ferrar Glacier, a 35-mile (56-kilometer) river of ice discovered during the 1901-1904 British National Antarctic Expedition and named after Hartley Ferrar, the expedition’s geologist. The glacier flows down through the Royal Society Range until it reaches the Ross Sea at a point near McMurdo Station, the largest research station in Antarctica.

The Advanced Land Imager (ALI) on NASA’s Earth Observing-1 (EO-1) captured this view of the main trunk of Ferrar Glacier on February 7, 2013. The Kukri Hills just to the north serve as the dividing line between Ferrar and the largely ice-free Taylor Valley. While most of Antarctica is covered by thick layers of ice, Taylor Valley and the other valleys that make up the McMurdo Dry Valleys are free of ice because relentless katabatic winds roll down from the ice sheet and rake moisture from the valley floors.

A small part of Taylor Glacier is visible in the upper left. Where the edge of Taylor Glacier meets Lake Bonney, there is a unique feature known as “Blood Falls.” Discovered in 1911 by a member of Robert Scott’s doomed expedition to the South Pole, the name refers to a rusty stain of red that coats part of the glacier and spills down toward Lake Bonney in a pattern that makes it look like a blood-red waterfall.

It’s not actually a waterfall. Nor is any blood involved. The red comes from microbes living within a pool of ancient seawater that has been trapped beneath Taylor Glacier for at least 1.5 million years. Due to the activity of the microbes, the seawater is rich with the iron-containing salt ferrous hydroxide, which quickly oxidizes and turns red as it seeps out a crack in the glacier.

Other interesting features are visible in the image. In the Kukri Hills, there are a number of thin, serrated ridges of rock—called arêtes. Arêtes form when bowl-shaped cirque glaciers grind away at mountainsides long enough to leave sharp ridges protruding between parallel valleys. When three or more glaciers erode toward each other, they can transform arêtes into dramatic pyramid-shaped peaks, called glacial horns.

Ferrar Glacier begins at Taylor Dome and flows toward the Ross Sea. North of it, an unusual feature known as “Blood Falls” stains ice bright red in one of Antarctica’s rare dry valleys. 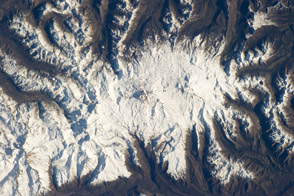 Acquired September 6, 2010, this natural-color image shows chunks of ice breaking off Matusevich Glacier along the coast of Antarctica.

In the early summer of 2011, the Medvezhiy Glacier in Tajikistan slid abruptly down its valley, creating a glacial lake.