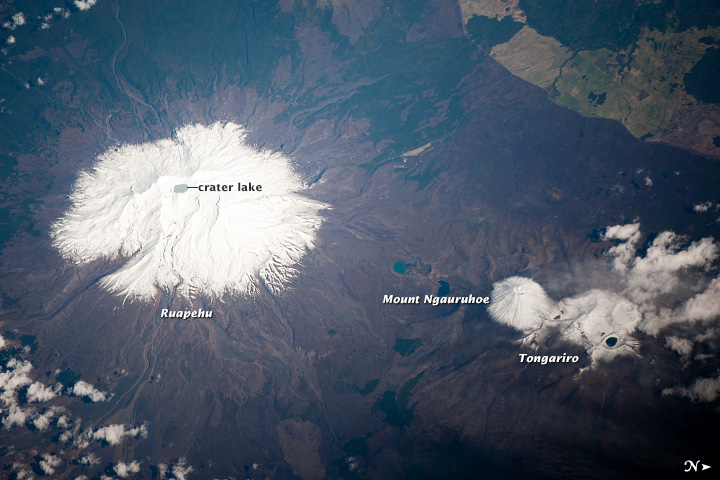 Mount Ruapehu is the largest and historically most active of several volcanic centers on the North Island of New Zealand. At 2,797 meters (9,177 feet), the volcano is the highest mountain on North Island. In this photograph taken by an astronaut on the International Space Station, Ruapehu is covered with snow on its upper slopes.

While there are three summit craters that have been active during the past 10,000 years, South Crater is the only one that has been active in modern record-keeping. This vent is currently filled with a lake (Crater Lake). Eruptions from the vent, mixed with water from the lake, can lead to the formation of lahars—destructive gravity flows of mixed fluid and volcanic debris that form a hazard to ski areas on the upper slopes and lower river valleys. The most recent significant eruption of Ruapehu took place in 2007 and formed both an eruption plume and lahars. The volcano is surrounded by a 100-cubic-kilometer ring plain of volcanic debris that appears dark grey in the image; vegetated areas appear light to dark green.

Located to the northeast of Ruapehu, the Tongariro volcanic complex is currently in an active eruptive phase (the previous eruptive phase ended in 1897). Explosive eruptions occurred in 2012 and have been followed by steam and gas plumes almost daily. The volcanic complex contains multiple cones constructed over the past 275,000 years. The most prominent of these, Mount Ngauruhoe, last erupted in 1975. Like Ruapehu, the upper slopes of both Ngauruhoe and the upper peaks of Tongariro are snow-covered. Scattered cloud cover is also visible near Tongariro.

Astronaut photograph ISS037-E-5089 was acquired on September 30, 2013, with a Nikon D3S digital camera using an effective 650 millimeter lens, and is provided by the ISS Crew Earth Observations experiment and Image Science & Analysis Laboratory, Johnson Space Center. The image was taken by the Expedition 37 crew. It has been cropped and enhanced to improve contrast, and lens artifacts have been removed. The International Space Station Program supports the laboratory as part of the ISS National Lab to help astronauts take pictures of Earth that will be of the greatest value to scientists and the public, and to make those images freely available on the Internet. Additional images taken by astronauts and cosmonauts can be viewed at the NASA/JSC Gateway to Astronaut Photography of Earth. Caption by William L. Stefanov, Jacobs at NASA-JSC.

The largest and most active of several volcanic centers on New Zealand’s North Island is also the island’s highest mountain.

On May 18, 1980, Mount Saint Helens volcano erupted. Because the eruption occurred in an easily accessible region of the U.S., Mount St. Helens has provided unprecedented opportunities for U.S. researchers to collect scientific observations of the geology of an active volcano and document the regional ecological impact and recovery from an eruption. 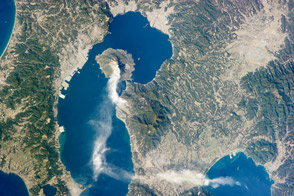 Once separated from the mainland, this volcano has the attention of scientists and emergency planners because of its proximity to several cities.

A long history of eruptions from Taal volcano has helped shape the southern end of the Philippine island of Luzon.