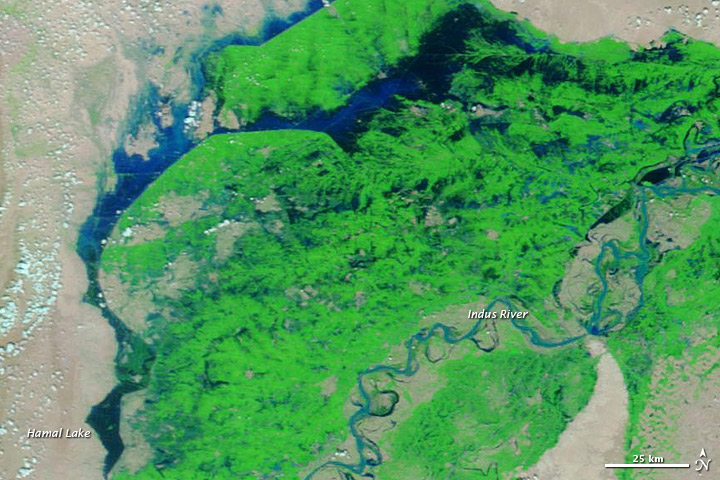 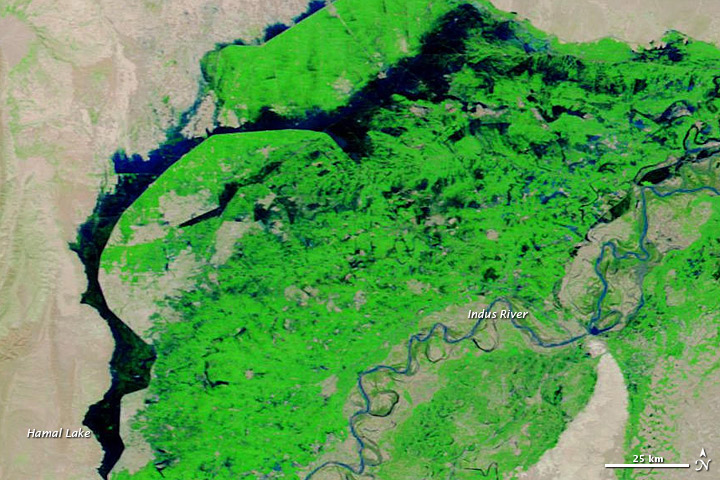 The summer of 2012 marked the third consecutive year in which the monsoon season caused widespread flood damage in Pakistan. The 2010 monsoon pushed the Indus River over its banks and carved an alternate channel. The 2011 rains led to floods in the southernmost part of the country. In 2012, the monsoon caused significant damage to irrigation infrastructure west of the Indus River.

Acquired by the Moderate Resolution Imaging Spectroradiometer (MODIS) on NASA’s Terra satellite, these images use a combination of visible and infrared light to increase contrast between water and land. Water varies in color from electric blue to navy. Vegetation is bright green, and bare ground is pink-beige. Clouds are pale blue-green and cast shadows. The irrigation infrastructure can be identified by its straight contours. In the more recent image, flood waters have receded in the northwest but increased around Hamal Lake.

Compared to conditions in 2010, significant flooding did not occur along the Indus River in 2012. Instead, floodwater pooled along levees and canals, according to the United Nations Institute for Training and Research (UNITAR). Pakistan’s Provincial Disaster Management Authority (PDMA) reported that the country experienced two bouts of seasonal monsoon rain in 2012. The first episode occurred in late August. The second occurred over southern Pakistan in early September, affecting parts of Punjab, Balochistan, and Sindh.

In fact, the PDMA reported, the 2012 monsoon rains arrived late and brought less precipitation than usual, but intense rainfall in September still caused widespread damage and casualties. Local news reports described especially heavy rainfall in Sindh Province and overwhelmed irrigation structures. On October 8, the PDMA reported a total of 451 deaths, 2,884 injuries, and 269,755 people in relief camps throughout Pakistan. The hardest-hit province was Sindh, with 258 deaths, 2,421 injuries, and 264,691 people in relief camps.

Besides the heavy rainfall, preexisting damage to the country’s irrigation infrastructure might have played a role in the 2012 floods. Dath Mita of the U.S. Foreign Agricultural Service cites the long-term accumulation of silt in Pakistan’s irrigation infrastructure. “Flood events tend to increase siltation and compromise the engineering integrity of the structures, and therefore the 2010 and 2011 flood events may have contributed somewhat.” But he cautions that prior floods cannot be confirmed as contributing factors in 2012 without on-site inspection of the flooded sites.