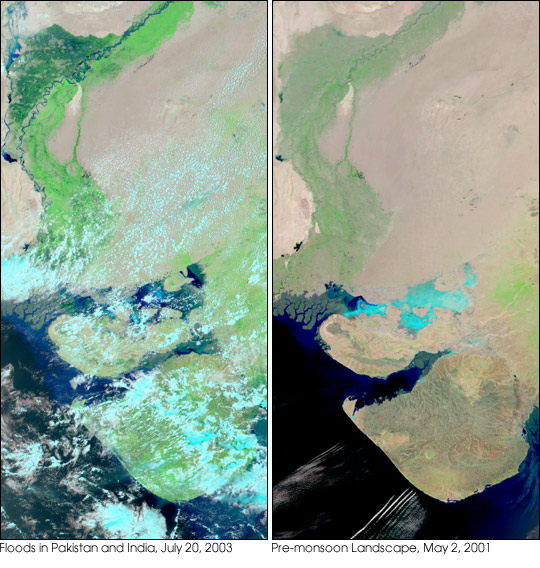 In mid-July, heavy monsoon rains caused major flooding along the Indus River in Southern Pakistan (top left) and in India’s Gujarat Province, which spreads over the two peninsulas in the bottom part of the image. In these false-color images from the Moderate Resolution Imaging Spectroradiometer (MODIS), standing flood waters are dark blue, vegetation is bright green, clouds are light blue, and bare ground is shades of tan and brown.

On July 20, 2003 (left), the flood waters create a bruised appearance in the vegetation along the Indus River, and cause the gulfs that intrude into the Gujarat Province to appear much deeper than normal. The image at right from May 2, 2001, shows the usual appearance of the landscape before the onset of the summer monsoon.

In August 2010, entire villages were washed away, more than 1,100 people died, and an estimated 2.5 million people were affected by dramatic monsoon rains.

Accessed October 5, 2010, and October 4, 2009, these false-color images show changes to the landscape wrought by the devastating 2010 monsoon season.