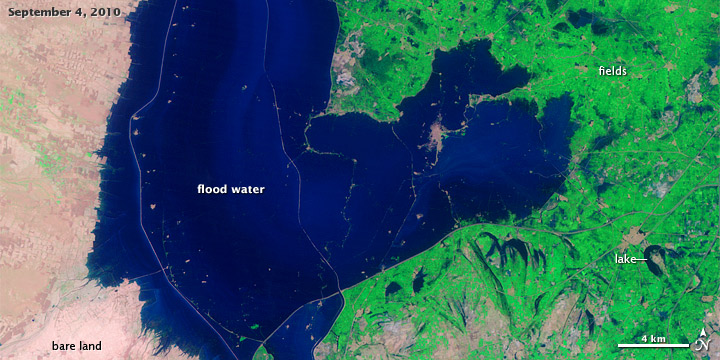 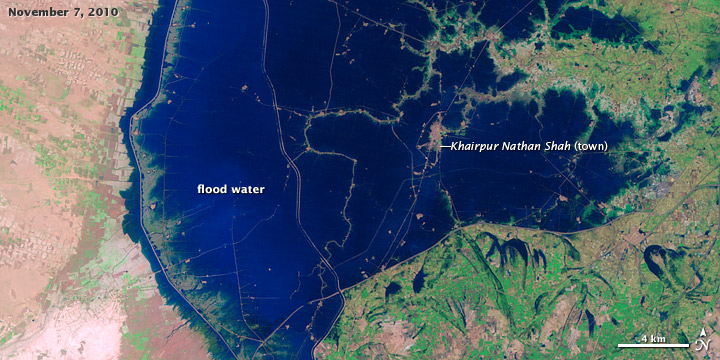 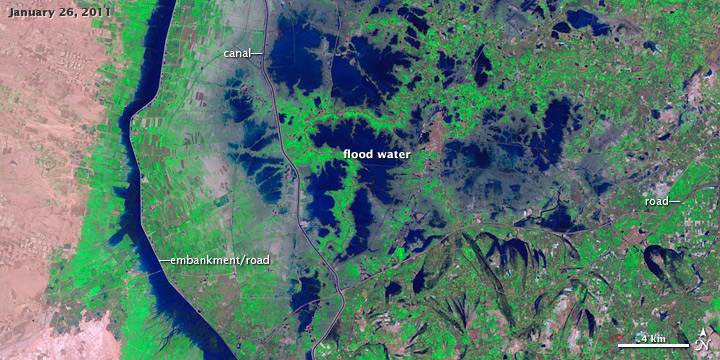 Monsoon rains fall on Pakistan every summer, but the summer of 2010 was extraordinary. A combination of factors, including La Niña and a strange jet stream pattern, caused devastating floods. The Indus River rapidly rose, and a dam failure in Sindh Province sent part of the river down an alternate channel. The resulting floodwater lake lingered for months, leaving crops, roads, airports, even entire communities underwater.

The town of Khairpur Nathan Shah was one of many communities affected by the floodwater lake. Normally surrounded by croplands and irrigation infrastructure, the town was instead surrounded by water for months. The Landsat 5 satellite captured these images of the area on September 4, 2010 (top), November 7, 2010 (middle), and January 26, 2011 (bottom). In these false-color images, water appears blue, vegetation appears bright green, and bare land ranges in color from in pink-beige to brick.

The image from September 4 shows water spanning more than 25 kilometers (15 miles) from east to west. Khairpur Nathan Shah pokes above the water, but only partially. By November 7, flood waters appear to have shifted, with some areas are drying out in the west, but a sizable patch newly submerged in the north. By January 26, more areas have emerged from the water, but the region is by no means back to normal.

A complex network of irrigation infrastructure also reappears as the landscape dries out. Once flood water pushed over riverbanks, manmade canals and embankments proved all too effective in holding that water in the wrong places. A new article, Heavy Rains and Dry Lands Don’t Mix: Reflections on the 2010 Pakistan Flood, examines the 2010 monsoon and its aftermath. Here is an excerpt.

The effects of the 2010 monsoon season in Pakistan were both immediate and lasting. Waterborne diseases such as cholera menaced flood survivors, while stagnant pools of water provided the perfect breeding conditions for malaria-carrying mosquitoes. Crowded relief camps and poor sanitation helped spread diseases such as measles.

David Petley, a landslide specialist from Durham University (U.K), was already keeping an eye on the Hunza landslide when the monsoon rains provoked him to start chronicling Pakistan’s unusual monsoon.

“It is hard to remember a previous flood that has caused this type of impact over such a long period, including the way it prevented replanting and reconstruction,” Petley states. Early news reports described the floods as Pakistan’s worst since 1929, “but this event was worse by almost every measure.”

Acquired September 21, 2012, and September 1, 2012, these images compare conditions in farmed fields west of the Indus River in Pakistan. Floods struck the region in September 2012.

In August 2010, entire villages were washed away, more than 1,100 people died, and an estimated 2.5 million people were affected by dramatic monsoon rains.

Acquired on February 21, 2011, and February 23, 2010, these false-color images show water levels along the Indus River before and after the monsoon floods that struck Pakistan in 2010.