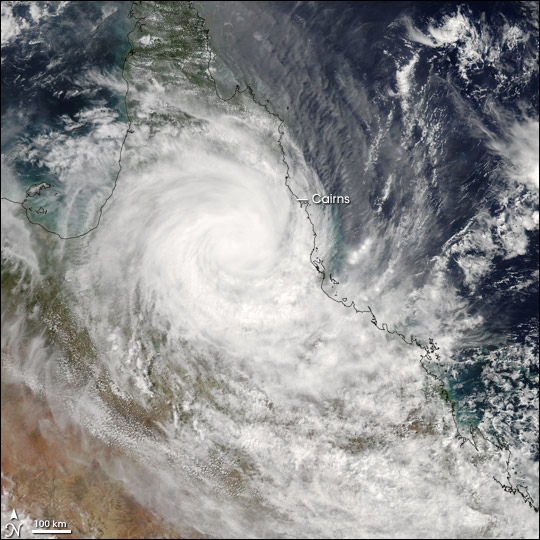 Tropical Cyclone Larry formed off the northeastern coast of Australia on March 18, 2006. The cyclone gained power rapidly and came ashore on Queensland’s eastern coastline, where it hammered beaches with heavy surf, tore roofs off buildings, and perhaps most destructively, flattened trees in banana plantations over a wide area. The Australian Broadcasting Corporation reported early estimates that as much as 90 percent of the Australian banana crop may have been lost in this single storm. Since many trees have been destroyed, it may be many years before the banana industry recovers.

When the Moderate Resolution Imaging Spectroradiometer (MODIS) on the Aqua satellite observed the storm at 2:55 p.m. Australian Eastern Daylight Savings Time (03:55 UTC) on March 20, 2006, Tropical Cyclone Larry had come well ashore onto the mainland, losing much of its power as it traveled westward. At the time of this image, Larry had peak winds of around 140 kilometers per hour (85 miles per hour), significantly less strength than it had possessed just one day before.

The high-resolution image provided above is provided at the full MODIS spatial resolution (level of detail) of 250 meters per pixel. The MODIS Rapid Response System provides this image at additional resolutions.