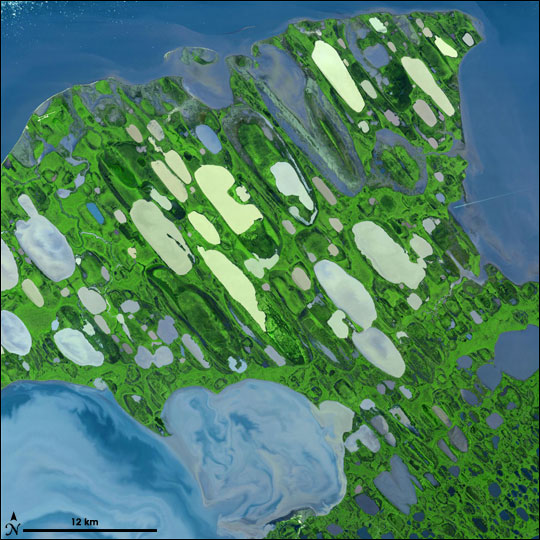 On January 11, 2006, the U.S. Department of the Interior (DOI) approved oil and gas drilling on approximately 500,000 acres of land in and around Teshekpuk Lake on Alaska’s North Slope within the National Petroleum Reserve. Up to 90,000 geese nest in this area in the summertime, and up to 46,000 caribou use the area for both calving and migration. Some environmental groups contested the DOI decision to allow drilling. The DOI decision stipulated that no surface drilling would be allowed on land considered crucial for molting geese or caribou, and a maximum of 2,100 acres in seven different zones could be permanently disturbed on the surface.

The Advanced Spaceborne Thermal Emission and Reflection Radiometer (ASTER) on NASA’s Terra satellite took this picture on August 15, 2000. In this image, green indicates vegetation and blue indicates water. Some bodies of water also appear in off-white or yellowish, probably due to different amounts of sediment in the water and/or the sun angle. The Beaufort Sea is at the top of the scene, while Teshekpuk Lake is at lower left. The land here is a lacy, lake-dotted expanse of tundra.

The large image covers an area of 58.7 by 89.9 kilometers, and is centered near 70.4 degrees North latitude, 153 degrees West longitude.

On January 11, 2006, the U.S. Department of the Interior (DOI) approved oil and gas drilling on approximately 500,000 acres of land in and around Teshekpuk Lake on Alaska’s North Slope within the National Petroleum Reserve.

Lago de Valencia (Lake Valencia) is located in north-central Venezuela and is the largest freshwater lake in the country. The lake was formed approximately 2-3 million years ago due to faulting and subsequent damming of the Valencia River. The lake has been completely dry during several discrete periods of its geologic history. Since 1976 Lake Valencia water levels have risen due to diversion of water from neighboring watersheds—it currently acts as a reservoir for the surrounding urban centers (such as Maracay).