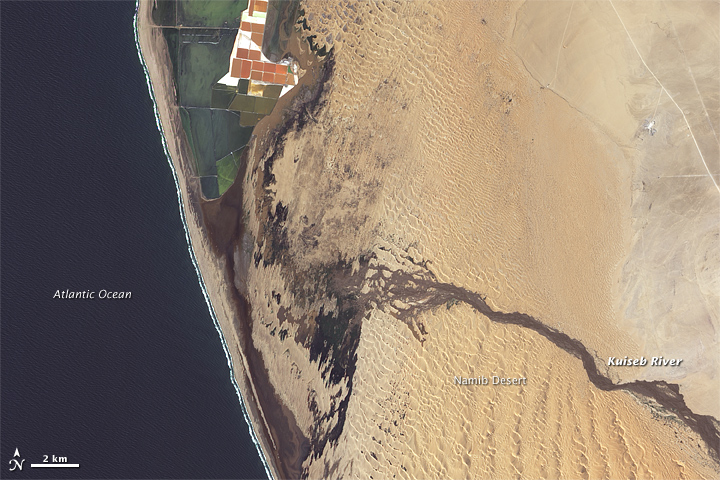 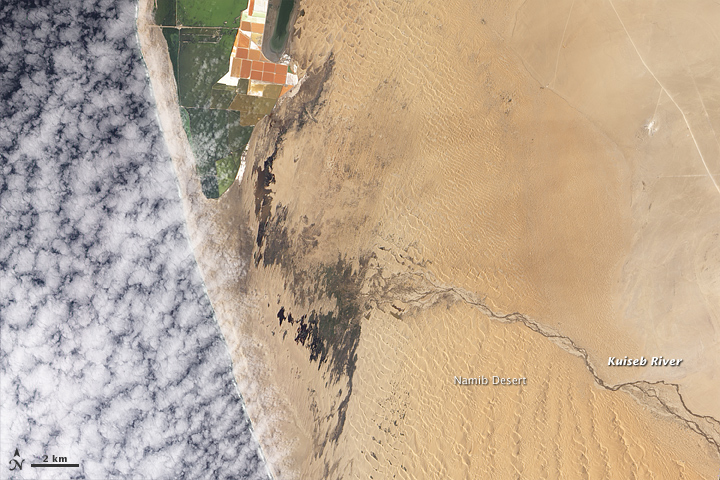 Between the Cunene (Kunene) River in the north and the Orange River in the south, the Namib Desert lines Africa’s coast. Although dry throughout, the desert does not have a uniform appearance. In the north, the desert consists of bare rocks; in the south, it consists of shifting sand dunes. The boundary between these two types of land cover is the Kuiseb River, and in 2011, the river reached the sea for the first time since the 1960s.

The Advanced Land Imager (ALI) on NASA’s Earth Observing-1 (EO-1) satellite captured these natural-color images on April 2, 2011 (top), and February 27, 2011 (bottom). The murky brown water of the Kuiseb River contrasts sharply with the camel-colored sand dunes to the north and south. In early April, the river’s water level is clearly higher than it was weeks before. In both images, dark pools of water extend to the coast.

Near the coast lies Walvis Bay (just north of the area shown here), where the Kuiseb historically drained into the sea. South of that city, shallow water and salt works create a range of hues, from burnt orange to green. A 1963 flood significantly damaged Walvis Bay, and prompted the construction of an embankment that caused the river to lose direction near the coast. In 2011, however, sufficient rains enabled the Kuiseb River to complete its seaward journey.